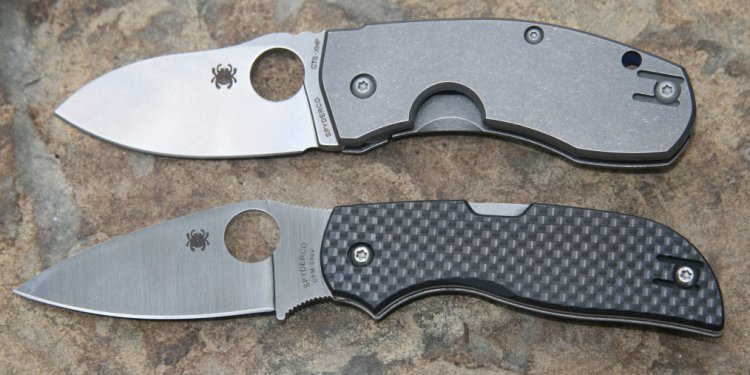 All photographs by the author

A good knife for boating has to hold up well in the marine environment. The blade has to be rustproof and hold a sharp edge. The Salt series of knives by Spyderco have been some of my favorites. I’ve collected a handful of them in the past nine years and they’ve held up well. The folders have remained easy to open and the blades have held their edges well and have been unaffected by salt water. (Some of the knives shown here are no longer in production or are available with a serrated edge only. Check Spyderco for the models currently available.) With just one exception, the Salt knives are made with H-1 steel. According to Spyderco, it’s not a true steel, but an exotic steel: It uses nitrogen instead of carbon in the alloy. Carbon reacts with the chloride in salt water to cause rust; nitrogen doesn’t.

My longest running test of the H-1 steel for corrosion goes back to 2009. In the spring of the year I strapped the sheath of a Caspian 2 Salt, a model now discontinued, to the front of my PFD. For the five years the knife has been in that sheath it has been subjected to countless immersions in salt water (rolling was a regular part of my kayaking routine) and a regimen of neglect. At best I’d hose my PFD off with fresh water, but I never removed the knife from its sheath to rinse and dry the blade. When took a look at the blade to report on it for this review there was rust stain at the base of the blade, a bit surprising so I took a closer look with a high-power loupe.

The rust was in an area where the blade makes contact with the sheath. There were coffee-colored stains and some small black nodules of rust. A wipe with some fine steel wool removed the stain and the nodules and the H-1 underneath showed no signs of pitting or any permanent stain. While it had looked like the H-1 steel had rusted, the rust was from iron particles that had attached themselves to the blade. The blade was slightly magnetic, confirmed by tiny fragments of the steel wool fiber I found stuck to the H-1. I looked with the loupe at another knife that I’d used for many years and saw particles of what must have been iron, not yet rust stains, stuck to the blade. I lightly brushed a brand new Salt knife with steel wool and found tiny fibers of steel, too small to see seen with the naked eye, attached to the blade. So, while I found rust on the H-1, it was from foreign particles attracted by the weak magnetism of the blade.

To test how well the H-1 steel would take an edge, I needed a dull knife so I started with Atlantic Salt with a plain edge (this model is now only available with the Spyderco serrated edge) and whittled through a 16-penny nail. The factory edge was sharp enough and tough enough to curl up little shavings of steel from the nail and after going through the nail the blade was dull but not chipped. I restored the edge with my usual sharpening sequence: a diamond hone, two Japanese water stones and finally a buffing wheel charged with rouge. In 2 minutes the blade was sharp enough to pass the thumbnail test, catching instead of sliding, and in another minute, sharp enough to slice into the loose edge of a piece of paper.

Among the latest offerings in the Salt series are the Jumpmaster and the Tusk. The Jumpmaster has a 4″ serrated blade and textured fiberglass-reinforced nylon grips.

Developed for Army parachute troops, it’s meant to cut through cordage and webbing quickly. I cut through ½″ solid braid nylon line in a single easy swipe and almost as easily sliced 8 layers of 1 ½″ nylon webbing —a combined thickness of 3/8″—in one go. A fiber-reinforced ½″ vinyl hose also succumbed to a single pass of the serrated edge. A tougher job is cutting out through a bight of line, but the Jumpmaster easily went through 3/8″ braid, and although the serrations made it hard to get a pull started on a bight of 1/2″ line, a single swipe cut through. The Jumpmaster and other Salt knives are good candidates for safety and rescue work where entanglements pose a threat.

The Tusk has blade of LC200N steel. Like the H-1 steel, the LC200N has nitrogen in the alloy to keep it from rusting. The blade is 2 ¼″ long, a very handy size for daily tasks and well suited to whittling. The titanium grips incorporate a tab to lock the blade in the open position and a spring-loaded ceramic ball to lock the marlinspike, a polished piece of 300-series stainless steel. A slot in the spike and the space between the spike and the handle serve as shackle wrenches. The hole in the blade, a Spyderco signature element, lets you open the blade with one hand.