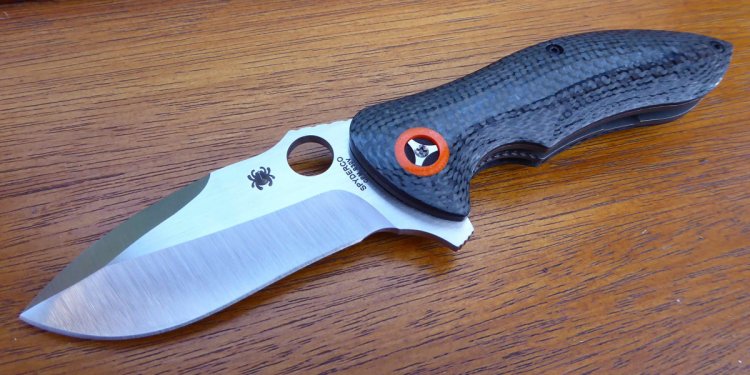 When the discontinued list from Spyderco gets released each year it causes something of a stir among knife knuts. It is like a starter's pistol going on in terms of collector and speculator interest. Which of these knives, which of the two dozen or so blades, is going to vault into that rarified air occupied by things like the Caly Jr. in ZDP-189 or the Jess Horn ZDP-189 where they sell for more than MSRP? Are any of these knives going to jump even higher on the list of collector's pieces and become peers of the Jess Horn or Klotzli Michael Walker (which sell for many times MSRP)? Spydero fans are nothing if not loyal and the quality of manufacture, diversity of design, and high end materials make Spyderco's out of production knives among the best chase knives of the production world.

The 2013 Discontinued List, found here, has a few interesting candidates. Is the Leafstorm a fad or a collectible? Is the PPT really as good as folks think? And what about the Zulu? If I were laying odds, either the PPT or the Zulu would be the hottest collectible from the 2013 list. But in terms of knives worth tracking down, I'd hunt for the Zulu well before the PPT.

Both are designs from well known custom makers (the Zulu is an Anso design and the PPT is a Fred Perrin design), but it appears that Anso has moved on to other production companies as collaborators, namely Boker and Fox. While I like Fox knives quite a bit, the Anso designs they are making are very big. Boker's stuff is well Boker quality and that means it is a non-starter for me. In comparison Perrin seems to be comfortably within the Spyderco loop and more Perrin knives seem to be coming. This means that the Zulu could be the only 3 inch blade from Anso that Spyderco makes. That could make it the one for collectors to watch.

But I am not a collector. My interest comes from its possible utility. The Zulu has most of the Anso hallmarks in a small, well-made, Spyderco package. You have the very unusual blade shape that lets you identify the knife as an Anso without looking for the maker's mark. You have the roughly corrugated G10 that has become synonymous with Anso the world over (though YouTube is full of people calling it the "An SO" pattern; the name is actually pronounced An SUE). Only his asymmetric grind is missing.

Aside from the interesting Anso touches, the blade itself is quite nice. The size, just around 3 inches with a small handle is right in my knife design wheelhouse. Then there is the Taichung, Taiwan manufacturer. Time has shown that this Spydercco factory can produce very high quality, complex blades. They were the folks that made the, as sales benefit the site and its giveaways. Additionally, as is always the case, you can get it at a discount right now. But if history holds here, that won't stay true for long. Discontinued Spydercos usually have the same price, then a drop until first run stock is gone, and then a slow climb back to or past MSRP on the secondary market. Given all of the unique and positive attributes that the Zulu has, I think it is likely that the knife will pass MRSP in the near future. Get one now, in case you missed it earlier.
Source: www.everydaycommentary.com