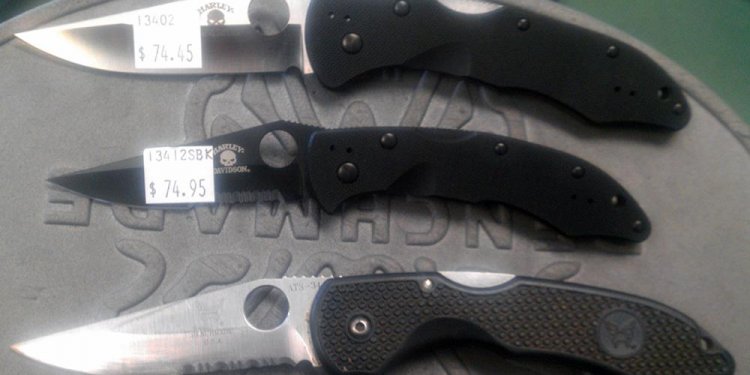 The suit was filed in the U.S. District Court of Colorado and alleges the Kittery Trading Post likely bought the counterfeit knockoffs of Spyderco Military and Para-Military brand folding knives from a Chinese distributor for $10 each.

The Spyderco Military knife has a suggested manufacturer's retail price of $259.95 to $279.95 and the Para-Military retail price is suggested at $259.95, according to the lawsuit.

“Kittery Trading Post is a third generation family run outdoor business that has been in continuous operation at the same Maine location for 79 years now. We take great pride in providing quality products at reasonable prices, and we are grateful for our thousands of loyal customers and over two thousand vendors who have trusted us with their business over the past eight decades. As our customers and vendors know, we are a real Trading Post and include pre-owned/used goods in our inventory, including used knives, ” Adams said in the statement. “Recently an allegation was made accusing us of misleading the public by importing and selling large quantities of Chinese knives that resemble a known maker. Not only is this false, but for anyone that knows us at Kittery Trading Post, the suggestion is outrageous. For nearly 80 years we have worked to build our reputation for integrity and honesty by maintaining excellent relationships with our vendors and providing outstanding service and value to our customers. This false allegation is regrettable, and we will strongly defend ourselves against it.”

As evidence of its claims, Spyderco submitted photos of the knives, allegedly purchased at the Kittery Trading Post on Oct. 15, for $75 and $80 each. The knives both bear the Spyderco name, the "bug mark" logo and the knife maker's "round hole mark" cut from the blades, according to the lawsuit and submitted photos. A receipt for the sales of the knives, which are described as "identical" to Spyderco's, as well as price tags on both, described the knives as "clone, " according to the suit.

By marking the knives as "clone, " Kittery Trading Post "was thus aware of exactly what it was doing when it chose to offer for sale through its store the counterfeit knives, " the suit alleges.

The lawsuit was filed in December and on Wednesday, no Spyderco knives labeled as clones were displayed as for sale.

Spyderco claims the knockoff knives also bore its signature stamp noting they were made in "Golden, CO, USA, Earth." Most of the Spyderco Military and Para-Military knives have blades made with a specific steel with "qualities prized by military, first responders and others who find themselves in situations that require constant critical use of cutting tools, " the suit alleges. The Spyderco knives are labeled that the blades are made of "CPM S30V" steel, which was also branded on the counterfeits purchased at the Kittery Trading Post, but an independent metallurgist confirmed they were not authentic, the suit claims.

Kittery Trading Post has purchased "tens of thousands of dollars' worth of knives from Spyderco, including the Military and Para-Military knives, " according to the suit, which claims Kittery Trading Post generates $25 million in pre-tax profits annually. The counterfeits, the suit claims, are "made of inferior materials and have an inferior build quality." If the knockoff fails, Spyderco claims in the suit, the company's reputation will suffer.

Meanwhile, Spyderco alleges, the Kittery Trading Post is making about an 800 percent profit selling counterfeit Spydercos "because Spyderco spent decades generating a strong product offering, demand for its high-quality goods and a near-cult following for its Military and Para-Military knives." Kittery Trading Post is undercutting Spyderco's cost by about 300 percent, while "free riding on Spyderco's corporate and product reputations, " the knife maker claims.