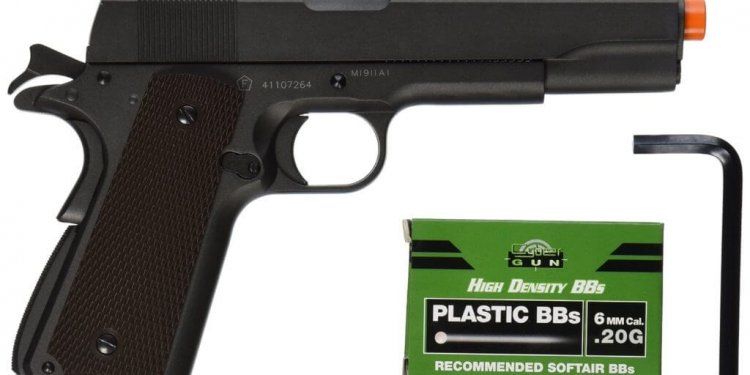 Rated 4 out of 5 by Trent So far so good! Bought this for my son's birthday for a first gun. He is 5, so it seemed like a good fit and it is. I do most of the cocking as it's a bit too tough for him. He can handle everything else very well. As for the construction, it is worth of the 40 dollars we paid! Love that the package comes with two guns, with plenty of ammo and eye protection. Apon, shoot the guns myself here is my assessment. The hand gun, super accurate at short range. 5-15 yards. So love that thing. The rifle, not so much. Shot is always considerably high and left causing me to adjust aim low and right. There doesn't appear to be any site adjustment so you have to adjust in the fly. But, again, I didn't buy this for some serious shooter. It's for fun for a 5 year old, and he is having a lot of it and he feels like a "big boy". So success. January 12, 2017

Rated 5 out of 5 by Mimi Great choice My grandson loved it and has really continued to enjoy it with his friends. Good choice in gifts for boys who are gun enthusiasts !! January 12, 2017

Rated 4 out of 5 by Isiah94 Decent starter gun I got this gun on X-Mas last year and it is very reliable. The rifle has good accuracy but is does have little curve. The pistol is not bad. It shoots decently but the curve on it is about 3 inches and has a little bit of dip but not bad if you're a beginner. It wont break unless you try to break it. BTW it is made of plastic and it is NOT an AEG December 30, 2016

Rated 1 out of 5 by Kaden13 not for wars This gun is not for wars because it is a springier and it is all plastic but if it was just for target practice it will work amazing. The pistols tiger just broke. So dot buy this gun for wars. December 29, 2016

Rated 5 out of 5 by Ninjaman17 One amazing gun Shot it a few times and loved it used it in a tournament and I have never been more happy the only down side is its a single shot but overall its very durable and a great gun!would buy again if i was looking for a starter again December 24, 2016

Rated 5 out of 5 by LOL Amazing This is an amazing gun awesome accuracy!Buy it! November 27, 2016

Rated 4 out of 5 by fartymcfarty Cool Gun Nice gun for starters... single shot is a downside... But otherwise nice gun November 27, 2016

Rated 5 out of 5 by mitchdoggo This gun is great My friend got this gun pack and he loved it. So I went a long at bought it too. They are high fps and great guns overall. Durable and love the rail system! November 1, 2016