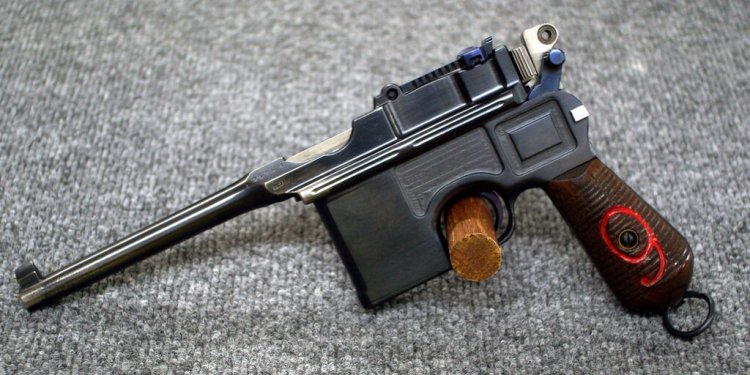 L.A. Confidential (1997), a crime drama set in seedy, crime-ridden Los Angeles in the 1950s, centers around a shooting at an all-night diner being investigated by three L.A. detectives. But it's not the movie's initial shootout that grabbed our attention. The star studded "Victory Motel shootout" that ends this film is one for the ages. Officer Bud White (Russell Crowe) and Lt. Ed Exley (Guy Pearce) are ambushed by a team of crooked cops led by corrupt boss Dudley Smith (James Cromwell) and the two courageously shoot their way out. The hero, Exley, carries his Colt DS and 1911 akimbo into the shootout, takes down the dirty cops and crawls out of the virtually destroyed Victory Motel in one piece.

Why We Love it: Crooked cops, a white hot Kim Basinger and one of the most explosive good-against-evil finales on our list makes this gun fight a standout. The two against 20 gun fight makes for a thrilling end to this acclaimed crime drama.

True Romance (1993) follows a comic store clerk who gets himself in huge trouble after 1) falling in love with a hooker, 2) stealing drugs from her pimp, and 3) selling said drugs to Hollywood execs. What could possibly go wrong? Well, everyone could die.

Why We Love it: Bullets flying everywhere - along with destroyed furniture - and plenty of shouting over thunderous gunfire. What's not to love?

We would be remiss not to include The Duke on this list, and the final shootout at the end of what would prove to be John Wayne's final film role doesn't disappoint.

Why We Love it: Vintage John Wayne - and even a young Ron Howard - going to town on an entire barroom: It's a classic Western scene, and one that never, ever gets old.

Tom Hanks’ character, Michael Sullivan Sr., mows down an entire entourage with his Thompson M1921 in .45 ACP before dispatching Irish mob boss John Rooney – the man who raised Sullivan. The pouring rain and soft piano add even more emotion to the unforgettable scene.

Why We Love it: Not all shootouts have to be all explosive gunfire and intense music, as director Sam Mendes proved with his artistically masterful gunfight toward the end of 2002’s Road to Perdition.

There's no use mincing words: Shane (1953) is classic, simple as that. Try as he may, an old gunfighter just can't seem to escape from trouble, and introduces a young shooter to the great sport.

Why We Love it: Shane shows some quick thinking here, taking down two assailants in a matter of seconds, and a third with the help of a precocious little scamp hiding outside.

Let it be known: The Terminator will stop at nothing when it comes to tracking down Sarah Connor, and if that means taking out an entire police station, so be it.

Why We Love it: Dual-wielding a Franchi SPAS-12 and an AR-18, the killer cyborg takes out the boys in blue like it’s nobody’s business. Arnie gets his just desserts in the end, however, when his cranium is crushed like a grape under a hydraulic press. Justice.

In what might stand toe-to-toe with Dances with Wolves in Kevin Costner's movie resume, delivers some of the most authentic shootout moments of any western in our list. The film's climax turns in an iconic gunfight between two free graze cattlemen, Boss Spearman (Robert Duval) and Charlie Waitte, and Denton Baxter's hired gunmen. Costner's most authentic scene comes when he puts a bullet right between the eyes of a hired hand with his Single Action Army, starting the furious shootout on the streets of the Old West.

Why We Love it: Almost every shot fired in this film feels as real as if you were sitting sideline. Costner's fast firing with the SAA and Duval's blasts with the Coach Gun all rang true.

Set in the Vietnam War, this scene from Full Metal Jacket shows a group of Marines trying to locate a sniper during the Battle of Hue, and putting their lives in each other's hands in the process.

Why We Love it: There’s no denying it: War is hell. Full Metal Jacket’s depiction of the Battle of Hue during the Vietnam War is painful to watch, just for the sake of the soldiers watching as their friends are killed one by one, but the courage of each soldier to bravely risk their own lives for one another is truly admirable. There’s no greater bravery than that. Semper fi, Marines.

Thank you, Bruce Willis, for giving us one of the greatest action flicks of all time with your 1988 masterpiece, Die Hard. Any red-blooded American man can’t help but get excited about John McClane - armed with his trusty Beretta 92F/92FS, though he would swap for a SIG-Sauer P220R and a Beretta Px4 Storm in the latest installment, plus an arsenal of submachine guns - winning a one-sided gunfight against a group of terrorists while spouting catchphrases left and right. Of course, it’s impossible to pick one shootout from this piece of cinematic gold, given the entire movie is one long shootout…

The same goes for Sylvester Stallone’s masterpiece (Come on, Rocky never used any guns.). Just like Die Hard, it’s impossible to pinpoint one great shootout in, or any of the Rambo movies, for that matter, no matter how much more gory each shootout became. And while Rambo may be well known for his trusty hunting knife, we all know the real action began once he got his hands on an M60 - though he does an unholy amount of damage in 2008's Rambo.

Ah, now we’re getting to the real good stuff. The Boondock Saints has become a cult classic, and for good reasons: great storytelling, and of course, plenty of guns.

Why We Love it: As police reconstruct a violent suburban shootout, the viewers are treated not only to gratuitous violence, but a veritable arsenal of handguns, most of them wielded by one character (above). Just as entertaining is Willem Dafoe’s brilliant retelling of the firefight.

Clint Eastwood stars as the good (AKA Blondie) in the third film in the Dollars Trilogy following A Fistful of Dollars (1964) and For a Few Dollars More (1965). Gunslinging was defined in this flick and the gunfights hangings and prison camp violence make it a shootout-lover's dream.

Why We Love It: Clint Eastwood has carved himself a place in almost every single list involving movies, guns and badassery. This movie is no different. The final gun fight is the epitome of western showdown. Quick, give us more intense music and close ups of those killer glares.

Let’s be honest, guys. Antonio Banderas is just so awesome. Sure, the guy makes ladies melt like any given Hollywood prettyboy, but man, can he handle a gun. Such was evident in the El Mariachi trilogy – more specifically, the second film, Desperado.

Why We Love it: El Mariachi’s gunfight at the bar is everything you could ask for in a shootout: slick moves, plenty of bullets flying, and of course, some beautiful guns, including the beautiful Ruger KP90s flying out of Banderas’ sleeves (above).

Why We Love it: In addition to a good old fashioned Western standoff, we're treated to typical Clint Eastwood banter when he explains himself for shooting an unarmed man. Classic.

The Wild Bunch (1969) stars William Holden as the head of a increasingly geriatric gang of outlaws who are looking to make one last score in Mexico. The film was considered highly controversial at the time because of the gun play and copious amount of violence, but that's one of the reasons we cherish it today.

Why We Love it: Some of our elder statesmen here at G&A spontaniously yelled out this movie's name when we first brought up the subject. The film's final scene belongs up there with the greats, as this bunch of criminals does one last good deed. G&A Executive Editor Payton Miller has been yelling, "Give 'em hell Pike!" in his office ever since we mentioned this movie.

Traditional gun nuts love to hate on this sci-fi action flick, but the cyberpunk manifesto boasts an extensive arsenal and some of the coolest gunfights you’ll ever see.

Why We Love it: Granted, Keanu Reeves’ showmanship is aided with the help of computers, but come on, how many of you can say with a straight face that you didn’t much care for that bullet dodging? In addition, the lobby scene (above) has all the collateral damage we come to expect from our action films – and some gravity-defying acrobatics to garnish it.

Robert DeNiro’s final shootout in this 1976 classic certainly isn’t pretty, nor is it the grand production like others on this list, but it is most definitely iconic.

Why We Love it: The image of a bloodied Travis Bickle pointing his fingers to his head and calmly saying, “Bang, ” after rescuing a child prostitute in a violent gunfight is one of the most enduring cinematic images of the 20th century – well-deserving of mention on this list.

In what is considered one of the greatest action sequences in movie history, 1995's Heat depicts a daring bank robbery and the ensuing chase. Of course, guns are blazing the entire time.
Source: www.gunsandammo.com