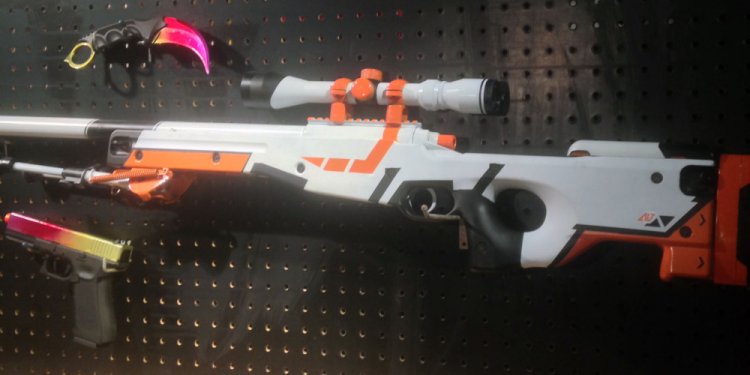 Airsoft is a popular combat simulation game in which players are eliminated when hit by pellets fired from realistic-looking guns, called an airsoft gun. While these guns may look fierce, they are harmless when used with proper accessories, safety gear and common sense, allowing people to engage in mock combat with one another, either individually or on teams.

Whether someone is just venturing into this hobby, or looking to add a new airsoft gun to his or her collection, it's important to have a basic understanding of the types of airsoft guns available. All airsoft guns involve propelling a small plastic BB or pellet out of the barrel at speeds ranging from 150 - 600 feet per second (fps). How they accomplish this feat is based on the type of gun. There are three types of airsoft guns, each with markedly different characteristics that make them better suited to certain situations and users. They are electric-powered guns, gas-powered guns, and spring-powered guns.

Airsoft was designed in Japan during the early 1970's. It was originally invented as a response to a nation-wide ban on civilians owning firearms. It provided a realistic alternative to shooting actual guns and in the 1980s the game quickly spread through Asia and into the U.S. Since then, airsoft guns have been a popular alternative to BB guns and paintball guns, due to their less damaging nature. Airsoft sporting is also typically cheaper than paintball.

An Overview of Electric, Gas, and Spring Airsoft Guns

The three types of airsoft guns all fire plastic pellets out of their barrels, but the technology behind each type of gun is quite different. While it's not necessary to have a full knowledge of how each airsoft gun works, it is important to have general knowledge of the different types of guns.

Spring guns are the most basic type of airsoft gun on the market. As the name implies, spring airsoft guns use a spring to fire a plastic pellet out of their barrels. They work on mechanical power, meaning that the user must cock the gun after every round is fired, much like a shotgun or bolt-action rifle. Spring-powered guns are typically seen as entry-level airsoft guns, although spring-powered sniper rifles can be very powerful upper-level fun.

Some users opt for powered airsoft guns. Gas-powered airsoft guns use many different types of compressed gas to fire the BBs. They are typically seen as intermediate guns and are very useful for outdoor target shooting. They typically shoot BBs at higher velocities than spring-powered airsoft guns and are also semi-automatic. Certain models are also fully automatic, although it's important to check the specific model of the gun to determine which firing method is available. Gas-powered airsoft guns chiefly use propane as propellent (commonly referred to as "green gas"), CO2 gas airsoft rifles are auto and adjustable to semi-auto, and can fire multiple BBs at once without cocking or reloading. CO2 gas guns generally fire at a higher FPS and fire a stronger shot than their green gas counterparts. Other types include nitrogen and HFC134a refrigerant.

Like spring-powered airsoft guns, electric airsoft guns also use springs, but they do so without the need to manually cock the gun. They usually include a rechargeable battery and battery charger. Electric guns are semi-automatic, and many have fully automatic, or full metal, capabilities. Electric guns are the most popular style of airsoft gun in team and league play. An airsoft rifle, assault rifles and other electric powered airsoft products are for airsoft aficionados who want to kit themselves out for military simulation exercises. They're priced generally reflects this.

Regardless of which type of gun a player chooses, he or she also has to decide between a pistol or a rifle. This is certainly true of gas and spring guns, but it is less true of electric guns. Because electric guns have the distinct bonus of offering fully automatic, full metal firing, they need to hold a large numbers of rounds. Pistols, by virtue of their size, cannot hold many rounds; therefore, there are few electric pistols available.

When choosing between a pistol and a rifle, there are four things to consider: price, capacity, size, and power. Rifles have the advantage of being more powerful, more precise, and able to hold a much larger number of rounds. On the other hand, they are more expensive, heavier, and tougher to maneuver in close quarters. Before choosing between an electric, gas, or spring-powered gun, it's important to be aware of the advantages and disadvantages of pistols and rifles.

In the heat of battle: Youth kendo competitors…
February 13, 2020