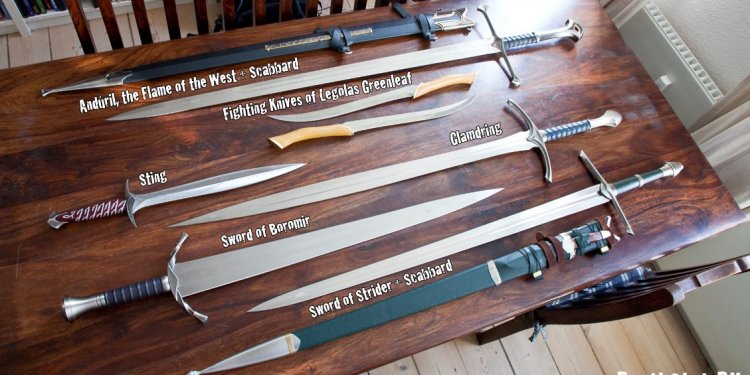 "Háma knelt and presented to Théoden a long sword in a scabbard clasped with gold and set with green gems" —,

Herugrim was an ancient sword, an heirloom of the royalty in Rohan.

At the time of King Théoden, the sword was at least five hundred years old. (When Gandalf and Aragorn point out the burial mounds outside Edoras, Legolas says, "500 times have the red leaves fallen in Mirkwood in my home since then." ) It was at last passed to Théoden, the last king of the second line of Kings in Rohan; who won victory with it at Helm's Deep, and died with it in his hand on Pelennor Fields, outside of Minas Tirith, while aiding Aragorn II Elessar in his plight.

Under the influence of Grima's leechcraft, Théoden had entrusted the blade to Gríma Wormtongue for safekeeping, but Gríma Wormtongue hid it away and allowed it to rust. After Gandalf restored Théoden to himself, Háma the doorwarden found the sword locked in Grima's chest.

The Lord of the Rings trilogy

Théoden, wielding Herugrim, after his curing.

In it is adorned with two gleaming horses' heads touching noses above the grip; the book describes it as "a long sword in a scabbard clasped with gold and set with green gems." Note that Théoden wields Herugrim in his left hand in the films.