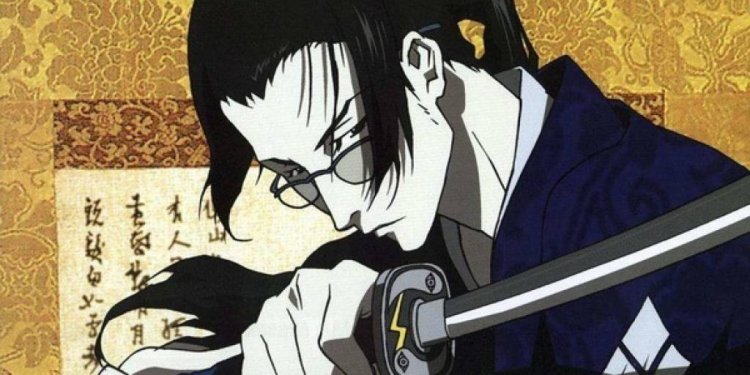 
Hunt For The Sword Samurai was a blind buy for me and though very little impressed me or could be considered exciting, it was certainly not a waste of time.

The plot has been regurgitated from dozens of other anime series. A thieving samurai faction has discovered where a magically endowed sword hilt is located and is determinted to make this dojo their next hit. If it was that easy though, they would have been able to overthrow the reigning government officials without competition. However, a young samurai named Shinjuro, a recently promoted headmaster to his samurai dojo, will not idly sit by and let the evil doings of his rival samurai go without opposition.

The dojo which Shinjuro, our local hero, heads, is composed of his elder sister, a childhood friend, and a mysterious girl from China, who claims she is the daughter a friend of Shinjuro's father. None of these samurai girls have anything more then a familiarity with the sword and are certainly no threat to a skilled weilder. The enemy faction, is composed of a former student of Shinjuro's father, and a rouge martial arts expert, who is deadset on overthrowing the head of state.

Of all the characters, Shinjuro and Mahoro (the rogue) seem to be the most skilled. But the balance is swayed with the addition of Shinjuro's fathers former student, whose name eludes me right now. Two against one. So what do you think happens. Shinjuro's father miraculously shows up to even the teams. Didn't see that one coming. However, now that our hero won't be pitted against two equally strong foe, he can focus completely on annihilating the ultimate threat, Mahoro.

The convenient plot seems almost hastily put together to ensure everything works out for "the good guys". And because it lacks anything even close to an orignal idea, don't expect to be dazzled with plot twists or suspenseful moments. On the bright side though, for a two-part OVA, the story is never rushed. It takes its time to quickly introduce characters, further the story, and ends on a high note. Very few series as short as this can say that.

As for characters, Shinjuro, is a believable lead. He is the only son to a skilled samuari, a student in his father's dojo, and was given the title of headmaster upon his father departure. With a few well timed fight scenes prior to his final match with Mahoro, we the audience, were able to witness his superior skills as a samurai. Thus, when he was forced to battle a more experianced warrior, we knew he was not completely outmatched. He is obviously a man of honor, and will help those that he deems to be weaker then himself, without a second thought for his own well-being. But though he is grown with skills of an adult when it comes to the sword, he is still just an adolesent boy when it comes to being around pretty girls.

Mahoro, the enemy samurai, was never given enough time to develop as a reasonable "bad guy". Why is it that he wants to overthrow the govenment? What has the government done that has tipped this man over to "the darkside?" I think there may have been a quick explaination near the end of the series about a rivilary, but if so, if was not noteworthy of rememberence. I don't remeber discovering how he became an expert swordman, or who he trained under either. Regardless his story, he suited the "bad guy" role fine and was certainly deadset in his goal.

I was very impressed with the quality of the art throughout the series. The characters themselves all looked great, though completely unoriginal. The girl were very cute; their outfits appropriate yet tantilizing. The male cast also looked very good, especially Shinjuro's father. He had a extreamly unique style to him and wore a messy beard that I was very fond of. Plenty of attention to detail was evident regarding the background cel animation, especially during more intense moments. These usually took place at either dusk or dawn and the vibrant use of reds, oranges, and yellows captured the true beauty of the time period.

The best part of the series however, in my opinion, was not the cute girls, or the final fight scene, or the samurai beards finesse. No, it was the boob humour! I'm have always been quite fond of the childish antics that revolve around situational foolery. Shinjuro accidently grabs a girls breast while fighting, tells the wrong person about it, and never lives it down. He becomes the butt of a very impressive and long running joke for the duration of the series. It's been done before, many a time over. I laughed the first time I saw it, I laughed the 10th time I saw it, and I'll laugh the 100th time I see it. Boob joke are dynamite.

As for the recommendation potential of the show. If you like samurai series, this will not be a complete waste of time. It has a great structure, decent fight scenes, and somewhat believable characters. The art is mangaed nicely, the music suits the mood well, and the humour is low-brow, yet very enjoyable. If however, you like to be blown away with an epic series, given vast amounts of character development, and enjoy meaningful dialogue, you might want to skip over this series. read more