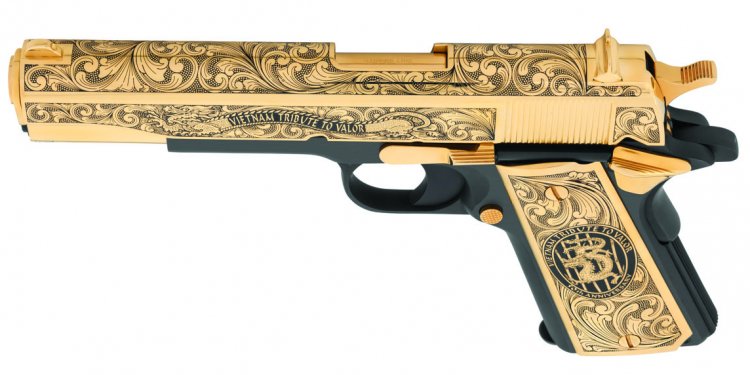 Whether as a world-famous martial arts champion, a larger-than-life action hero in films, a rugged lawman on television, a devoted patriot, or an outspoken champion for youth through his KICKSTART KIDS Foundation, Chuck Norris has never stopped fighting. A country boy from Oklahoma, he has risen to become one of America’s most recognizable film and television stars, and a legend in the martial arts world.

Throughout his remarkable career, Chuck Norris has portrayed a wide variety of heroes in films and television. Some have used high kicks and flying fists. Others have used pistols and machine guns. Like the characters he has played, Chuck Norris remains a man of action, a proud American who is passionate about his faith, his principles, and his love for America. Today, he is an outspoken supporter of the rights and freedoms laid out by our Founding Fathers, especially the Second Amendment.

To honor this remarkable American legend, America Remembers is proud to present an exclusive Tribute issued with the approval of Chuck Norris: . Each Tribute is a handsomely decorated, working Colt® Government Model® pistol in caliber .45 ACP. Craftsmen commissioned specifically by America Remembers decorate each Tribute in stunning 24-karat gold and gleaming nickel on an elegantly blued steel slide. This handsome Tribute honors the legendary career of Chuck Norris, and demand is expected to be high.

For this Tribute to Chuck Norris, we selected a classic American firearm legend that defended America’s liberty for more than 75 years: the Colt® Government Model® .45 pistol in caliber .45 ACP. The pistol was designated in 1911 as the official sidearm of the United States military. It was used by America’s Armed Forces from World War I through World War II, Korea, Vietnam, and continues in use today. It’s a classic American firearm and many veterans consider it to be the best sidearm ever issued by the military. We felt it was a perfect choice for the Tribute to Chuck Norris, who served in the U.S. Armed Forces and remains a champion of American values.

An American Legend in the Making

Chuck Norris was born in 1940 in Oklahoma. Growing up poor, he was fascinated with the cowboy heroes of the silver screen. These rousing tales of the Old West taught the shy boy that actions speak louder than words and good can triumph over evil.

In 1958, Chuck joined the U.S. Air Force. He had always been intrigued by police work, so he signed up as an Air Policeman and soon found himself stationed in South Korea. It was during his time overseas that Chuck discovered martial arts. He became a dedicated student of Tang Soo Do, completing a rigorous schedule of training and earning his black belt.
Chuck Norris quickly became a superstar in the martial arts world. In addition to numerous regional and national championships, he is a six-time undefeated World Professional Middleweight Karate Champion. With his success, he also became a respected teacher of the martial arts, training famous figures such as Steve McQueen, Bob Barker, Donnie and Marie Osmond, and Priscilla Presley. In 1968, Norris was inducted into the Black Belt Hall of Fame as Fighter of the Year.

After conquering the karate world, Chuck found his way into motion pictures. He appeared with superstar and friend Bruce Lee in Return of the Dragon. He followed up with a string of tough-guy roles in 1970s films, such as Good Guys Wear Black and A Force of One, and he continued to dominate the 1980s box-office with such films as Lone Wolf McQuade, Missing in Action, Code of Silence, The Delta Force and many others.

In the 1990s, Norris took the opportunity to renew his boyhood love of the Old West in the television series, Walker, Texas Ranger. Playing Cordell Walker, a modern-day Texas Ranger with toughness rooted in Old West tradition, Chuck portrayed the lawman as a no-nonsense hero with his own style of “rounding up the bad guys.”

The left side of the slide features another inspirational quote from Chuck Norris within an elegant banner reading, “To accomplish great things, We must not only act, But also dream; Not only plan, But also believe.” Surrounding this quote are two recognizable images of Norris. On the left is a handsome portrait of Chuck Norris and on the right is an action-shot of Norris, holding two firearms, ready for action. To the far right, you will also find a familiar image of Chuck Norris the cowboy. At the breech end of the slide on both sides lies a lawman star badge with “Chuck Norris” outlined in the art.

The right side features a classic portrait of Chuck Norris and an image of Norris standing ready in his karate gear and black belt. Between these images lies a banner featuring a quote from Chuck outlining his support of our inherent American freedoms, “I want violent crimes curbed… but not at the expense of our Second Amendment rights.” Near the muzzle you will find an elegant banner featuring a depiction of his signature.

Only 500 will be available in this strictly limited edition available exclusively through America Remembers. Order now and you can be one of the fortunate owners of this handsome Tribute honoring a truly remarkable American legend, a man of action who has inspired millions of his fans to always do their best. Delivery of your working Tribute will be arranged through a licensed firearms dealer of your choice. As always, you will receive your Chuck Norris Tribute Pistol with our 30-day guarantee of satisfaction. If you are not completely satisfied, you may return your Tribute in original, unfired condition for a complete and courteous refund. You can order online below, or to prioritize your order and confirm availability, call us toll free at .

Whether you are a longtime admirer of Chuck Norris, either as a fan of his movies or television series, his martial arts career, or his ongoing commitment to standing up for America’s values and freedom, you won’t want to miss this special opportunity to acquire this handsome Tribute for your collection. This Tribute honors a proud American who embodies all the values, principles and courage that make America so great. The Chuck Norris Tribute Pistol handsomely captures the career of an American who has inspired and entertained so many of us, and the Tribute is certain to bring back your favorite memories of Chuck Norris.

An option high-quality, wooden display case is also available. The locking glass lid protects against dust and unauthorized handling. The glass lid locks with a brass key, and the case liner is custom-contoured to hold your Tribute in place.