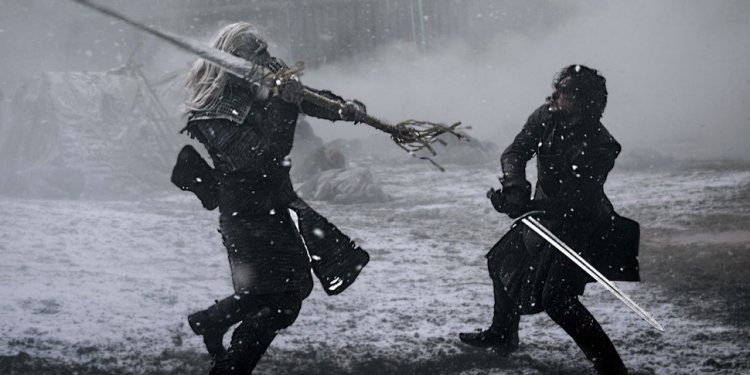 Blackfyre, the ancestral sword of House Targaryen, once wielded by Aegon the Conqueror, lost during the Blackfyre Rebellion.

Dark Sister, a longsword of House Targaryen, held by Visenya Targaryen, lost during the Blackfyre Rebellion.

Ice, the ancestral greatsword of House Stark. Captured by House Lannister when Eddard Stark was taken prisoner, and used by Ilyn Payne to behead Lord Stark at Joffrey Baratheon's command. After the Red Wedding and defeat of House Stark, Tywin Lannister had it melted down into two smaller longswords, one gifted to his son, Jaime, the other to his grandson, Joffrey Baratheon.

Oathkeeper, the first longsword made from Ice. Given by Jaime Lannister to Brienne of Tarth.

Widow's Wail, the second longsword made from Ice. Given to Joffrey Baratheon as a wedding gift, now owned by Tommen Baratheon.

Longclaw, a bastard-sword of House Mormont, given by Jeor Mormont to Jon Snow.

Brightroar, the ancestral sword of House Lannister, lost by King Tommen II Lannister when on his expedition to Valyria.

Heartsbane, the ancestral sword of House Tarly. Stolen by Samwell Tarly from his father in Season 6.

A dagger wielded by an assassin who attempts to kill Bran Stark with it. It previously belonged to Petyr Baelish, but he claims he lost it in a bet to Tyrion Lannister. However, the ownership of the dagger when it was used by the assassin is never firmly established in the TV series.

Lamentation, the ancestral sword of House Royce, lost in the Storming of the Dragonpit.