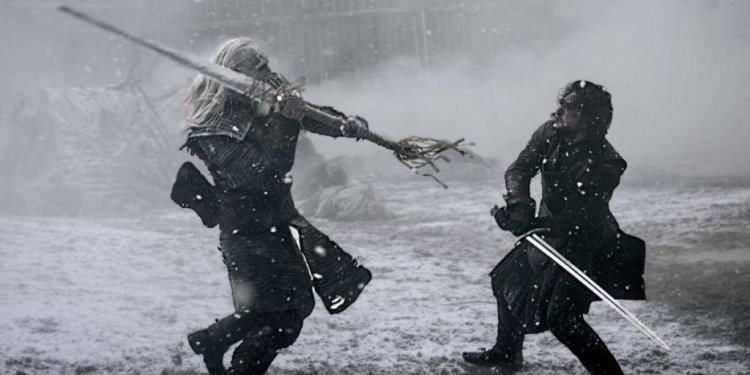 Throughout the Seven Realms of Westeros, steel clashes against steel, flames level armies to the ground, and massive frozen structures keep great enemies at bay. But there are other kinds of weapons, too, beyond the physical instruments of death warriors wield against one another.

Behold, 10 of the greatest weapons featured on HBO's Game of Thrones:

1. Ice
The Wall aside, Ice is the name of the first great Valyrian sword featured on Thrones. It belongs to Lord Eddard Stark of Winterfell, used to pass sentences against traitors — including himself, ironically enough. After Ned's death, his sword was melted down into two smaller weapons: Brienne of Tarth's Oathkeeper, and the late King Joffrey's Widow's Wail.

2. Longclaw
Another Valyrian sword, this one originating with Night's Watch Lord Commander Jeor Mormont. It was originally meant for his exiled son Jorah, but ultimately fell into Jon Snow's possession. Since then, Jon has used Longclaw against endless enemies, most famously using it to turn a White Walker into a crisp pile of ice.

3. Lightbringer
Although the weapon has not yet appeared on Game of Thrones, Lightbringer is a fabled sword that's virtually guaranteed to see the light of day. According to legend, the great hero Azor Ahai used this weapon to defeat the White Walkers during the Long Night, thousands of years ago. Will it reemerge in modern day Thrones, now that the Others are almost upon Westeros once again?

4. Needle
Arya Stark's weapon of choice is a tiny instrument of death, but an instrument of death all the same. The youngest daughter of Ned and Catelyn Stark doesn't need any one way to kill her victims — her ruthless instincts and training at the House of Black and White more than suffice — but if she has her druthers, Needle is her preferred method.

5. Hodor
It's more accurate to say "warging, " a magical ability Bran Stark and others use to insert their consciousness into other living creatures. But it's more fun to say "Hodor, " and not entirely unfair, either, since Bran has taken over his oversized bodyguard's mind to crush bad guys on more than one occasion.

6. Direwolves
All of the Stark siblings, bastard Jon included, possessed feral sidekicks at one point or another. Gone are the days of Greywind, Lady and Nymeria, but the likes of Summer, Shaggydog and Ghost still thrive, serving their masters faithfully, defending them against all possible enemies.

7. Dragons
They were considered extinct for centuries, but anyone who views dragons as nothing more than myth is in for a rude awakening when they meet Daenerys Stormborn of House Targaryen. She's the proud owner of three ferocious, flame-spewing beasts — Drogon, Rhaegal and Viserion — and she's not afraid to use them in her slow-going quest to conquer Westeros.

8. Wildfire
Dragons are not the only great manipulators of fire in the world. Just ask Davos Seaworth and the other soldiers burned alive at Blackwater Bay, consumed by neon green wildfire during Stannis Baratheon's failed assault against King's Landing. It's the napalm of Westeros, capable of destroying an entire army in the blink of an eye.

9. Poison
The best way to topple a mountain is with a spear slicked in venom. That's how Oberyn Martell managed to crush Gregor Clegane — even though he himself was ultimately crushed as well. Indeed, it's a great Dornish tradition to poison enemies, just as Ellaria Sand used a poison kiss to kill Myrcella Baratheon. Really, poison runs in the Baratheon family, as seen in the deaths of Robert and Joffrey.

10. Chaos
Chaos is more than a ladder. It's a weapon capable of destroying legacies and changing regimes, if used properly. Few people are better manipulators of the stuff than Petyr Baelish, who has thrown Westeros into chaos and continues to reap the benefits. But chaos can backfire in horrible ways, too; look no further than the mutineers who took over Craster's Keep, as an example. The Night's Watch would have been wise to remember that lesson, before stabbing Lord Commander Snow in the middle of the night.