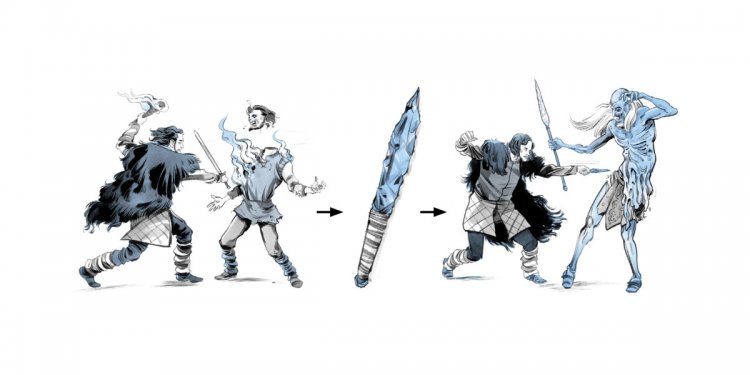 The title of this article is conjecture based on information revealed in the A Song of Ice and Fire novels or related material and may be subject to change.

White Walker ice blades are incredibly sharp, capable of decapitating a man in a single swing. Conventional bronze and steel weapons freeze and shatter when used against ice blades, although Valyrian steel suffers no ill effect and is an effective counter-weapon. It is not clear if dragonglass shares this property.

Originally the White Walker ice blade props were made out of resin. As weapons master Tommy Dunne explained in Season 5:

"For the White Walkers, we have a long pale sword which is supposed to be a shard of ice. The handle is a bit more samurai-ish. We’re very lucky, this year we found a brand new translucent rubber. It’s much more durable, much stronger, and we’re able to fight with it, which is the main thing."

In the novels, there is no formal name for the ice blades that the White Walkers carry. They are first described in the Prologue of the first novel when Waymar Royce is surrounded by White Walkers. Their crystal swords are thin and sharper than any razor. They are stated to appear "alive with moonlight, translucent, a shard of crystal so thin that it seemed almost to vanish when seen edge-on. There was a faint blue shimmer to the thing, a ghost-light that played around its edges."

To be clear, they are at times called crystal blades because they are crystals of ice, not stone/silicon crystals. George R.R. Martin has stated that the White Walkers' blades are indeed made of ice - though in the same sense that Valyrian steel can be said to be made of iron: just as the Valyrians were able to infuse iron with spells and blood magic and twisted it into unusual shapes, the White Walkers can magically tease out ice into various shapes, and imbue the ice with spells that make it stronger and sharper than any iron sword. As Martin said, the White Walkers "can do things with ice that we can't imagine."

White Walker ice blades are magical and unnatural. The intense cold from the blade will eventually shatter a sword that comes into contact with it, though not instantly. Waymar's sword crosses with the ice blade in several strokes, after which his sword appears covered in hoarfrost. When he makes one final great swing from his sword it then shatters from the intense cold. It isn't clear if the ice blade itself is cold, or if it is conducting cold from its bearer - as seen in the TV series when Samwell Tarly attempts to attack a White Walker but it grabs his sword with its bare hand, which then freezes and shatters in its grip. The TV series changed this slightly so that any normal iron weapon that ice blades make contact with will instantly shatter on the first blow from the cold (though maybe Waymar's sword survived a few blows because it was high-quality steel, as he was a rich nobleman, and low-quality iron weapons won't even last that long).

When the White Walkers' ice-blades initially hit Waymar's sword, they are described as making an unusual high-pitched noise: not the ring of metal against metal or metal against ice, but "only a high, thin sound at the edge of hearing, like an animal screaming in pain." The TV show kept the detail that any blade that the White Walkers' ice-crystal weapons make contact with, if it doesn't shatter, will make a strange high-pitched ringing noise, when Jon parries with Longclaw.

The Season 5 episode "Hardhome" confirmed that Valyrian steel weapons are resistant to the White Walkers' weapons, and can even kill the White Walkers themselves. This had not been confirmed yet in the novels, though characters do suspect it: Samwell Tarly reads over old books containing legends about the White Walkers in the first war against them in the Long Night 8, 000 years ago (as he was seen doing earlier in Season 5), and he discusses two things with Jon. First, he notes that besides Dragonglass (obsidian), it is also mentioned that "dragonsteel" can kill White Walkers - both of them suspect that this refers to Valyrian steel, which was forged in dragon-fire (such as Jon's sword Longclaw). They don't know if the legend is true, however, and have not yet had a chance to test this information in the novels. According to legend, Valyrian steel was forged in dragon-fire and infused with blood magic spells.