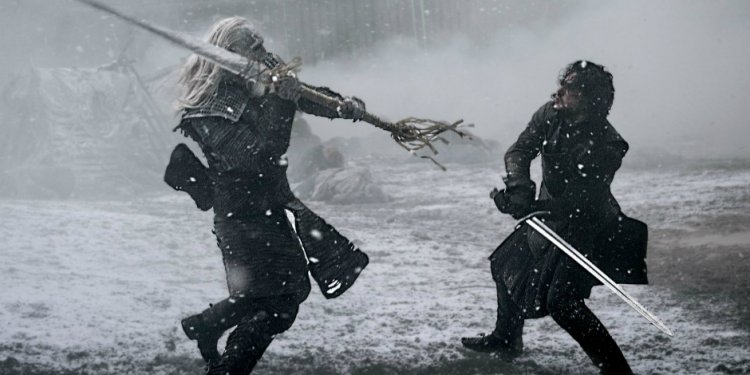 When Sam stole off in the middle of the night with the ancestral Valyrian steel sword of his family, the two-handed greatsword Heartsbane of House Tarly, it sent us on a quest to learn everything we could about those priceless weapons forged in dragonflame and magic. So you can imagine our excitement when we found these up-close photos of the craftsmanship and care that HBO put into really making it.

We first came across this detailed look at the design of Heartsbane at the ‘s complex history.

Let’s first examine the steel itself. It’s been said that Valyrian steel’s real world counterpart is Damascus steel, for the wavy patterns found on each. The famed Damascus steel, whose own process was lost for centuries, got its distinct look from “using the pattern welding technique of alternating layers of steel and iron, folding and twisting the metal during the forging process.”

Valryian steel’s own patterns came from being folded over on itself thousands of times while being forged, and you can see those patterns in HBO‘s Heartsbane. Its design seems far less random though than some Damascus steel, and considering Valyrian steel is made with literal magic, we can imagine there is a method for that, but not one that anyone left alive knows (Valyrian steel’s secrets were lost with the Doom of Valyria and the death of the dragonlords).

However, as cool as it is to examine the steel, it’s the hilt of Heartsbane that has us really geeking out. House Tarly is an old and noble house of the Reach, sworn to House Tyrell.

Its sigil is a striding hunstman with his bow and arrow ready to fly, and though its house words have never officially been revealed, they are believed to be “First in Battle.” Without getting into the history of the house, we’ll just say that its sigil and (supposed) words are a fitting description for the Tarly family and their renown in Westeros. Which is what makes this hilt so damn fascinating. Here’s a closer look.

Heartsbane’s antler holder and beautiful wooden sheath let you know that this belongs to a family of hunters, but it’s what is being hunted on the hilt that reveals a lot. There are two huntsman, ready to fire in each direction, and they both appear to be hunting sigils of some of the great families of the Seven Kingdoms. On the left it appears a lion (House Lannister) and a stag (House Baratheon) are the quarry, and on the right at least one of those look like a direwolf (House Stark).

It’s not totally clear what the other figure is, or what is on the far ends (a fox for House Florent? A Kraken for House Greyjoy? A serpent for Dorne?); however, it’s not the details that are of note here, but the fact this is detailed at all.

We’d hardly be expected to ever notice these specifics on the show, nor could we expect them to take the time to show us, but they are still there. Game of Thrones has a massive budget, and it’s easy to see where that money goes with the massive sets, giant casts, and VFX, but for those of us that get excited over the smaller elements that help make Martin’s world of ice and fire so immersive, it’s nice to know that not only do they have some extra money to make those little pieces this great, but that they love it enough to want to do it.

What do you see on the hilt of Heartsbane? It would be a dagger to our heart if you didn’t tell us what think in the comments below.