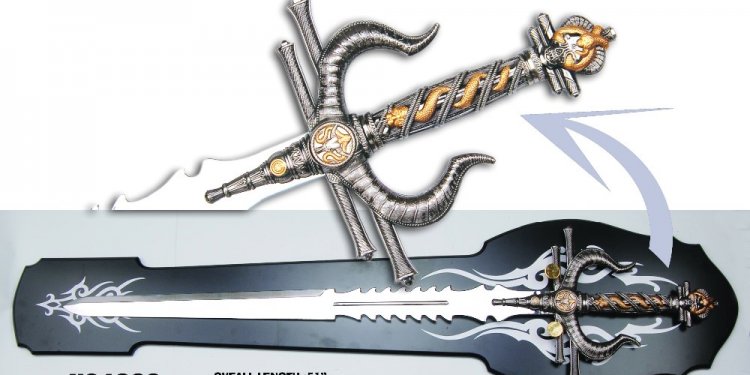 Many online sword sellers bandy the terms Battle Ready Sword and Functional Sword around like its going out of fashion. But just because a sword is called Battle Ready by a merchant doesn't necessarily mean that it can take the kind of punishment you might want to dish out to it

Before you part with your hard earned cash and decide to buy what is being described as a battle ready sword, you'll need to know the answers to four very important questions.

Otherwise, you'll have no way of knowing how to seperate the truly functional swords from the wanna be's (other than taking a sword merchants word on it) - and you could easily wind up with a 'real' lemon...

Type of Steel and Tempering

While stainless steel swords are very low maintenance, they are also molecularly brittle and cannot take nearly the same punishment as the swords of middle ages, regardless of the steel coming from Toledo Spain or any other region.

There are several other types of Carbon Steels, Spring Steels, Tool Steels and others - however the AISI 10xx and 5160 are the most common. For more detailed information on the different types of steels swords are constructed from, check out this article

Anyway, just because a sword is made from Carbon Steel doesn't necessarily guarantee that it is battle ready. For a sword to be functional, it needs to be properly heat treated.

The author, flex testing a sword

The goal of heat treating is to achieve a balance between toughness and hardness. Too soft, and your sword gets cut in two. Too hard and the sword is too brittle! Its a delicate balancing act, and heat treating incorrectly can totally ruin a sword.

A swords relative hardness is measured by a number the Hardness Rockwell Cone (HRC)..

High numbers indicate a harder material. In general, European style swords should have a HRC of 45-50. Differentially tempered Japanese swords (meaning the cutting edge is harder than the back of the sword) should have an edge of HRC58-60 and a back of HRC38-40.

Some businesses or websites boast about the quality of the steel but don't mention how or if the sword was heat treated. This can sometimes be an indication that it hasn't been heat treated properly at all!

In fact, I've seen some so called battle ready swords from Pakistan which are described as High Carbon Steel but because they have not been properly heat treated, they are as soft as butter!

Technically, I'd say that the people selling them figure these swords can be described as battle ready because they are made from High Carbon Steel, but for all practical purposes, you might even be better off buying a stainless steel wall hanger sword!

Its practices like this that makes it all the more important to buy your battle ready sword from reputable dealers made by well known and respected manufacturers that have a solid reputation for using good quality steel and doing a thorough heat treatment.

Now, thats not to say that if you happen to stumble upon a battle ready sword made by a relatively unknown manufacturer you shouldn't buy it. Just be a little wary, and if it doesn't say in the description how the sword was heat-treated, ASK!

Hilt Integrity and the Tang

Many cheap swords are just an accident waiting to happen.

Any sword is only as strong as its weakest point. And the weakest point of most swords is the handle  specifically, the swords tang, and how it is attached to the blade.

A European battle ready sword needs to have what is commonly (and mistakenly) called a full tang.

Actually, the term 'full tang' can be a bit misleading.

A 'full tang' is really describing two halves of a handle that sandwiches the tang on either side such as you see on your everyday kitchen knives or on a machete. But what most people are referring to is a tang which is forged as part of the sword and then peened or even threaded over the pommel - not just a thin rod that's welded on as an afterthought (i.e. "rat tail tang").

Japanese swords often have partial tangs that are held in place to the handle with one or two pegs called "Mekugi". Half tangs and rat-tail tangs are especially prone to breakage when the sword is forcibly swung and cannot stand up the stress of making contact with another object. Push tangs on the other hand, unless properly secured, have a nasty tendency to fly out of the handle and through the air like a missile!

Sometimes you can plainly see by looking at a photo of a sword what kind of tang it has, but more often than not it isn't quite so clear as the tang is hidden away in the handle. So again, if it doesn't say so in the description - or if you don't know or trust the manufacturer (some are good enough that every sword is tempered!) - it's safer to assume the worst...

Steel and Tempering, Handle and Tang  these are the four essential "yin and yang" qualities of a functional battle ready sword.

While simply looking for these qualities may not guarantee you a 'perfect' battle ready sword, it will at least weed out those that don't stand a chance...