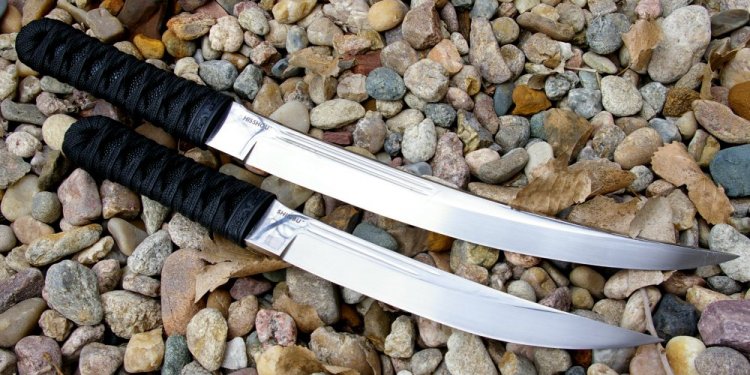 Perhaps the only truly perfect combat instrument ever created; A seamless extension of your arm with no moving parts and little maintenance needed. It served us well for thousands of years and swords have never misfired or ran out of ammunition.

Browse our full selection of swords.

Full tang and tempered these swords are the real deal

Longswords, broadswords and two handed war swords. These are the biggest swords that we offer.

These are not historical replicas but they are still pretty cool.

These swords are used with one or two hands. Longer than a typical battle

Foam swords used for Live Action Role Play(LARP) or for just having fun.

An elegant weapon from a more civilized time.

These are the classical swords of medieval Europe.

The most sleek and civilized of all swords.

Whether you're standing shoulder to shoulder on the beaches of Troy or facing down a Thracian gladiator in Rome, these are the weapons you would have used.

All of our curved swords including scimitars, falchions and sabers.

Gaelic swords including Scottish and Irish.

Short swords were especially effective for in close fighting.

These swords have blunted tips and thicker edges and are better suited for sword on sword contact.

Save us from the fury of the Northmen.

Mace Windu
Mace Windu was one of the most famous of all Jedi. Only Yoda, Anakin Skywalker and Luke Skywalker were perhaps more well known. Windu, born on Haruun Kal, Mace was orphaned as an infant and turned over to the Jedi for his upbringing. He was the youngest Jedi to be accepted into the Jedi Council (28-years-old), until Anakin Skywalker dethroned him (Anakin was 23 when he was accepted). Windu was a ferocious fighter, but he was just as good at diplomacy, and his words heled much weight in the Jedi Council. Before he killed people, Mace was known to give a long rambling prayer that ended like this:

I may be getting my movies mixed up here, though.

At Strongblade, we sell swords that are made for us, as well as swords made by other manufacturers. Our swords (most of them start with the prefix SBA-) are all manufactured to our specifications. They are hand forged and crafted almost entirely as swords have been for thousands of years. In addition to our swords, we are dealers for most major, reliable, sword dealers out there (so if you don't see something on our site, chances are we can get it for you anyway). Unlike many other sword vendors, we are very careful about what swords we put on the site. Every sword that we put on our site is guaranteed to meet quality benchmarks that we set. We're not saying every sword we sell is equal, but every sword we sell will be of excellent quality for its price.

In this world of robots that make cars, pianos that play themselves and droids that vacuum your house, it's heartwarming to see a product that is actually made by human hands. Our handcrafted swords are made by humans, for humans (although if you wanted to give one as a gift to your robot, we wouldn't hold it against you). Our humans hammer the steel as it has been done for thousands of years. They heat and quench the blades just like blacksmiths of old. Because of this, each sword (or item) will vary slightly from the next. There will be small discrepancies in each, discrepancies that would be called minor blemishes had they been made by a machine but are instead marks of authenticity in hand-crafted items.

Strongblade sells both tempered and non-tempered swords. Both type of swords serve a purpose. Non-tempered swords are good for costume or very light sparring. Tempered are considered "Battle-Ready" by many people, meaning you can sharpen them to a very fine edge and do some light cutting with it (or leave it dull and do some light, low-speed sparring with them, assuming you are fully armored, are wearing eye protection, and have been trained by a professional to do this).

Honoring an American Legend Whether as…
March 29, 2020

The Discovery Center for Entrepreneurship…
March 26, 2020