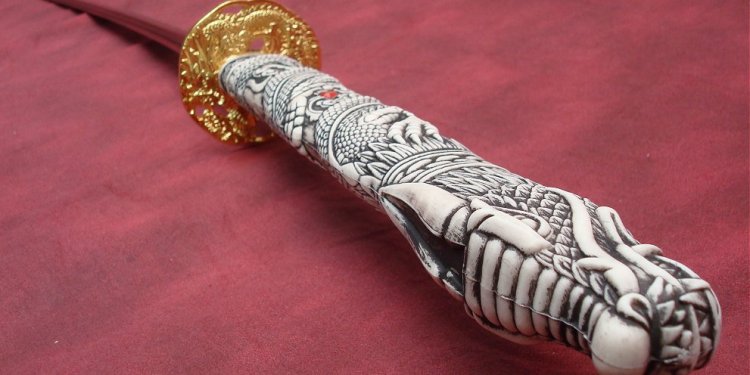 I must admit, I was guilty of not taking Ryumon Katana very seriously in the past.

When these swords first hit the market sometime in 2005 (which was really the start of the whole entry level Chinese made Katana craze), I unconsciously and dismissively bought into the whole 'Ryumon swords are crap' vibe that was popular on certain Sword Forums at the time, and as new manufacturers started literally churning out swords by the truckload,  somehow I kind of ended up putting them to the bottom of my 'check it out for myself' list...

But as is often the case with forums, no one who commented on them had actually bought one - it was all based on assumption, and in retrospect, was really more of a case of automatic sword snobbery and casual dismissal than on anything concrete...

But as it turned out, they may well have been an undiscovered jewel in the junk that, several years late perhaps, was really worth a much closer look...

The first thing that struck me when my Ryumon order came in was the size of the box.

Considering that its a Katana, the first cardboard box made me think that there were at least 2-3 swords in there! After removing the cardboard box and polystyrene packing, I was confronted with a solid, and very heavy and wide solid pine sword case with a prominent Ryumon symbol.

Being quite thick, strong and padded internally, the box was an excellent means of protection during transit. On the downside, it meant that I was paying a decent portion of my 0 or thereabouts FOR the box and the extra weight it would cost me when shipping (once from China, and once again from the warehouse to me)..

I hoped there would be some money left that went into the sword inside..!

I gingerly lifted the lid straight off and tried to figure out why this box was so wide. The main reason was that the generic cleaning kit in there was positioned sideways at one end- which is silly really. But inside, I found quite a few extras (which again, I had effectively paid for - further reducing the money that went into the sword) and did a search for the sword (I hope they had remembered to put one in there!)

Ok, so time to search through all this stuff..

There was a rather mysterious looking scroll and a so called 'Reference Guide'. The first words of the reference guide made me cringe..

"Congratulations, you are now the proud owner of the finest hand crafted sword in the world!"

I resisted the urge to vomit into the box, regained my composure, and flipped through the booklet. In truth, it wasn't a bad guide..

Inside was information on sheathing and unsheathing the sword, complete instructions on how to use the cleaning kit, storage information, a glossary of Japanese sword terminology, how to disassemble the sword and more! Great for a beginner and not a bad touch.