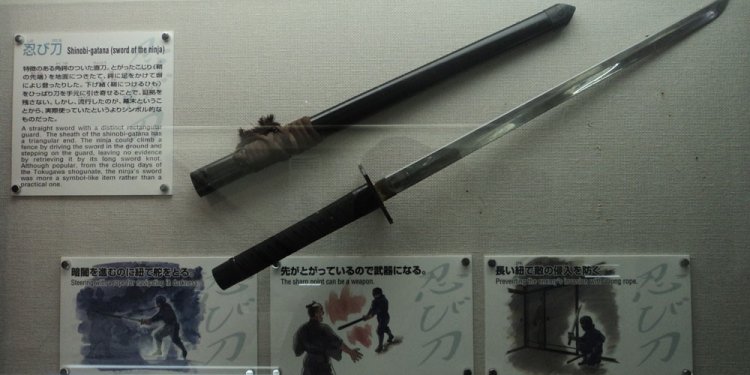 When it comes to Ninja Swords, there are two conflicting schools of thought on what they actually looked like..

One school of thought, which is perhaps the most popular, is that the swords of the Ninja Warriors of Feudal Japan were unique - a concept that Hollywood has wholeheartedly embraced. The other school of thought was, as the Ninja were primarily spies and occasional assassins, their sword would not be so unique as to attract undue attention from casual observation..

Now while I am no expert on the subject, I've lived in Japan for a couple of years, been to the Ninja 'homeland' in Iga (now a part of modern day Mie prefecture, but once literally a Ninja stronghold in the mountains) - and I must conclude..

But maybe, just maybe, the Ninja would want it to be that way..

That said, I'll do my best to present what little I have learned about the subject, let you draw your own conclusions - and just show you what the current market for Ninja swords looks like...

When most people think of Ninja swords, they probably think of something like the blade below, a short bladed sword with a chisel tipped end, straight blade and square handle like the Hanwei Iga Ninja sword below.

Originally, like most people who have dug into the history of Ninja swords tends to believe, I was of the opinion that it was invention of martial arts master who helped to popularize Ninjas during the "Ninja Craze" of the 1980s..

That was, until I went to the Ninja Museum in Iga and saw THIS on the wall that is..

There is was, the same kind of thing - described right there on the museum wall in English as:

But when I asked the curator about it in broken Japanese, he explained it was a replica. And more research revealed that there is not a single authentic antique like this ANYWHERE in the world..

Now the main reason why I doubted this kind of sword to be a real Ninja sword was because, if you are a spy, you would not want to have on you something that is an immediately identifiable spy tool. And the fact that there is no antique anywhere in existence...

But that hasn't stopped the market from making some replicas of this style of Ninja sword. Let's take a look at two of the better ones below.

OVERVIEW: They may or may not be historically accurate. But this short, fast blade actually IS most definitely 'practical'. Capable of fast, rapid fire cuts and with amazing penetrative capabilities, it's a good sword no matter which way you look at it!

OVERVIEW: A budget cutter with a jet black blade, it's simple in design and execution, but actually not a bad little cutter. Great value, the best budget version of a Ninjato currently on the market.

The other school of thought on what Ninja swords really were is perhaps the most plausible - that is to say, concealed blades or swords that are not quite what they seem to gain a quick, tactical advantage should the need to use a blade arise (as spies or even assassins, using a blade would be a method of desperate last resort).

Again, the Ninja Museum offers some insight into this possibility with what I will call 'exhibit B' - blades concealed in what appear to be simple travellers staves..

This is of course, eminently plausible. Ninja historically often disguised themselves as priests or merchants to travel long distances without arousing suspicion. But as they were most definitely not ordinary travelers they needed a little something extra up their sleeve (or should I say, up their stick as the case may be).

The sword industry as a whole has not really caught on to or embraced this type of plausible Ninja Sword - at least, not directly. But such a replica can be found with the Zatoichi Sword, the sword concealed in the blind mans cane..

OVERVIEW: This is an older review, made several years before I saw the concealed staff blades at the Ninja Museum, so it only references the Zatoichi movie. My main concern in this review is if it could be deemed functional or not.. And as you will see, while it can cut, I was hesitant to label it as a true cutter..

The other school of though on 'secret blades' comes from Dr. Masaaki Hatsumi's Federation.

If you ask Dr. Hatsumi about Ninja swords, he will tell you that they were typically swords that looked like a normal Japanese Katana when sheathed, but disguised a much shorter blade that could clear the scabbard in an instant and was versatile enough to be used in situations where a normal Katana would become cumbersome and unwieldy...

In response to requests by practitioners of the Bujinkan, Cheness Cutlery, developed a custom Bujinkan Ninjato made to closely resemble one owned by Dr. Hatsumi  the Togakure Ryu Ninjato.

And as you will see, it is easily the toughest and most affordable custom Shinobigatana on the market...

OVERVIEW: When sheathed, it looks like a normal Katana with a long handle. But when drawn it acts like a short hafted Naginata (pole arm)! Very unique, highly versatile, and as you will see in this review, extremely tough and durable to boot.

On many an internet forum, the battle rages on - which one is the TRUE Ninja sword, but whenever you talk about a historical organization like the Ninja, who THRIVED on misdirection and confusion, finding the trail of bread crumbs to the smoking gun (or sword) is not going to be easy.

My thoughts, for what they are worth, is that ALL of the above were Ninja swords..!

When the Ninja were infiltrating directly in the dead of night, it did not matter what they carried on them - if they were seen at all it was all over.. In such cases, a 'tactical' Ninja sword was in order, a tool that they could use in many different ways..