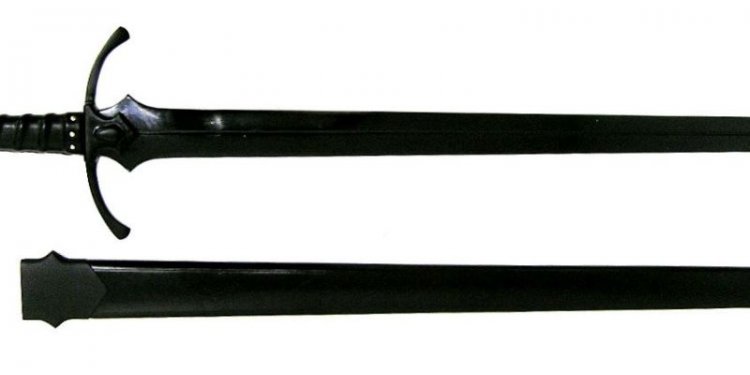 Deepeeka are well known for their cheap battle ready swords. But not all of their swords are marketed correctly. Some are intended as display items only, yet the line between battle ready and decorative is purposefully blurred by some vendors, with sometimes disastrous results.

In this review we take a look at one such sword. Lumped in with other cheap battle ready swords, this sword is nothing of the sort. And while SBG concentrates on separating the jewels in the junk in the sub US$300 sword market, some of them are far beyond salvation...

This was my very first sword purchase. Having spent little to no time researching, I sent away for the first sword that caught my eye. All I knew was that they were 'cheap Battle Ready swords', which apparently meant that they was 'real'.

The moment I got it out of the box, I was struck by how heavy it was. Having never handled a 'real' sword before, I assumed that I was a wimp and continued to examine it.

Like everything from Kult of Athena it came promptly and wrapped in brown paper. To this day the smell of brown paper gives me a bit of a thrill, because I associate it with the arrival of something I've waited for eagerly.

I held the sword in my hands, turning it over a few times, trying to get a feel for it. Even without knowing much my first thought was that it was poorly balanced. And I was right. Weighing in at 5 pounds, approximately a pound and a half heavier than the same sword shown at .

"I remember thinking, 'Geez, Charlemange must have been strong like a freak to be able to use this thing.'"

The original was probably a bit lighter, with a thinner blade - this one has a thick, meaty blade that is closer to a Falchion than a longsword.

The research I've done would suggest that the original (currently residing in Louvre Museum in Paris, France) would have had the same length but less weight and durability - appropriate for a sword that belonged to an Emperor.

The blade had nice polish, and the fuller was pronounced and even.

As these cheap battle ready swords come un-sharpened, I later would have it sharpened - with some interesting results.

Not that I was expecting anything else, but the original Charlemange Sword - Joyeuse - had a golden handle, as opposed to mine which has cast brass.

Just thought I'd point that out. The handle is the same cast brass as the hilt, and uncomfortable to hold - especially as your hand becomes sweaty with use.

It also leave you smelling like you've been counting pennies all day.

"After one practice swing I nearly dropped the sword as the hard edge of the pommel dug into my wrist. Serious pain!"

Adjusting my grip on the sword did little to alleviate this problem - there was nowhere else for my hand to go. I was able to take a 2-handed grip by squeezing the pommel in my off hand, which helped with the horrid balance and pommel problems - but the pommel was so large that this was an equally uncomfortable arrangement.

The level of detail on the brass guard is very beautiful. I would say that this is the best feature of the sword, even though there was a slight gap between the blade and guard. Because it is one piece with the grip and pommel I assumed that this meant more strength... but what followed proved me very, very wrong.