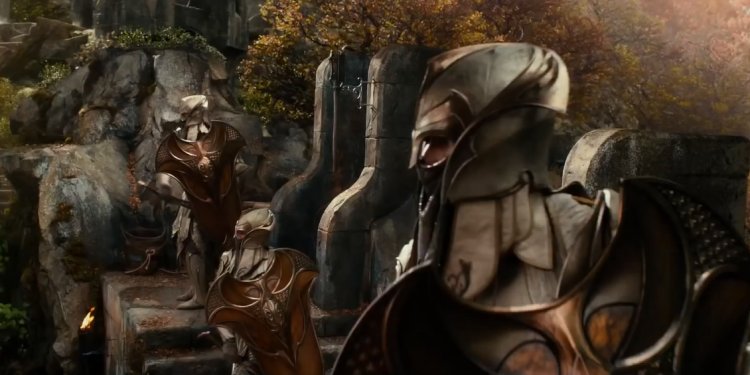 Lord of the Rings Elven armor

ANSWER: Not very much, in my opinion, although I don’t mean that in a bad way. The “Lord of the Rings” movies had to depict multiple cultures across a long period of time in such a way that the audience could easily distinguish between all the characters and communities. While a Hobbit would obviously be shorter than a Man, the Elves of Rivendell and Eriador had a different lifestyle from the Elves of Lorien, and the Elves of the late Second Age were more warlike than the Elves of the late Third Age. So many subtle clues were used to help distinguish between various groups. Among these clues viewers have noted:

As far as noticeable differences between Peter Jackson’s Elves and J.R.R. Tolkien’s Elves, here is a brief but incomplete list:

It would be difficult to visually depict all the distinctions Tolkien made between various characters and cultures. Short of tagging every Elf in the film with a subtitle that says “Elf” one must choose a visual style for Elven characters that leads audiences to conclude that the Elves are not simply Men. The pointed ears was a simple decision that has been popularized by role-playing games and fantasy novelists who came along after Tolkien.

The movies really had no time to dwell on the Elves’ philosophical ideas. Even Tolkien himself barely squeezed any Elf philosophy into The Lord of the Rings, but there are some scenes that are very revealing in a subtle way. I can only think of Elrond’s conversation with Awren from “The Two Towers” where Peter manages to convey something of the “other issues” that concern Elves. In the books the Elves are always talking about leaving Middle-earth; in the movies the need to depart from Middle-earth is shown in several scenes, but one might easily get the impression that the Wood-elves are not as obsessed with leaving Middle-earth as the other Elves. Even Thranduil’s Elves were vulnerable to the compulsion, as Tolkien’s sub-plot for Legolas reveals.

The movies probably did well enough in depicting the Elves as holding themselves above the affairs of Men, Dwarves, and Hobbits but there was really no time to dwell on the immense amount of grief and guilt that the Elves should have felt for the harm they had done to Middle-earth by creating the Rings of Power. In fact, the movies lead the audience to believe that most of the Rings were made for Dwarves and Men, and that is simply not the case in the books — but one has to read The Silmarillion and Unfinished Tales of Numenor and Middle-earth in order to completely understand the history of the Rings of Power. Hence, the movies did well enough in explaining the history of the Rings but had to sacrifice a lot of other history in order to show the audience complete vignettes.

And that is really all that the audiences of either the movies or the printed Lord of the Rings see of the Elves anyway: limited but self-contained vignettes. In that respect, Peter Jackson was able to do about as well as J.R.R. Tolkien, and I think it can be said that the movies had to devote less time and attention to the Elves.