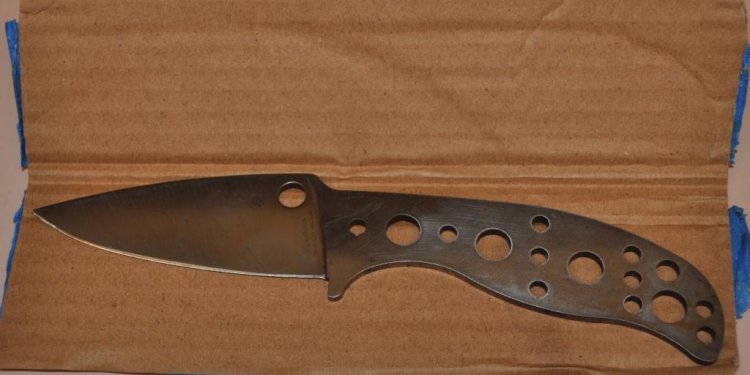 Description
SPFB34GP: FB34GP Reverse
Spyderco
The Reverse is an exciting fixed blade knife that represents a literal meeting of the minds of two renowned personal-defense instructors who are also veteran Spyderco collaborators. Craig Douglas, aka "Southnarc, " is a veteran law enforcement officer, an expert martial artist and a highly respected close-combat instructor. Best known to Spyderco enthusiasts as the designer of the popular P'Kal folding knife, he is also a leading proponent of "reverse-edge" knife tactics in which the knife is held so the cutting edge faces back toward the user. This style of grip allows the body's major muscle groups to power the edge and generates devastating cutting power.

Michael Janich is a noted author and instructor and a leading authority on all aspects of personal defense. He is an advocate of "edge-out" knife skills in which the edge faces away from the user. Janich's system of Martial Blade Concepts (MBC) focuses on using the knife to cut key anatomical targets to immediately disable an attacker.

Several years ago, Douglas and Janich were both featured instructors at the NE Shooters Training Summit in New Hampshire. After several students suggested that their different approaches to knife tactics made them rivals in the tactical community, the two instructors (who are actually good friends) decided to prove them wrong. They brainstormed to co-design a knife that would work equally well edge in or edge out and ideally allow students to understand and appreciate the logic of both approaches.

After agreeing that the basic form of the knife would be a fixed-blade version of Douglas' P'Kal folder, the two defined the other design features of the knife and sheath that they both felt were critical. Janich then translated these into a drawing and ultimately a handmade nylon concept model, complete with molded Kydex sheath. After a few additional refinements, they presented the idea to Spyderco and the rest, as they say, is history.

The defining characteristic of the Reverse-and the inspiration for its name-is its unique reversible handle. It consists of two textured black G10 scales that are carefully machined to create a hollow cavity for the blade tang. The scales are secured to the concealed tang, which extends two-thirds the length of the handle, by three sets of bolts. By removing the bolts with the Torx T-8 wrench included with every knife, the scales can be easily removed and mounted to the tang with the blade's edge facing either direction. Whether you prefer edge-out or reverse-edge tactics-or you just want to experiment with either one-the Reverse allows you to quickly and easily configure your knife accordingly while maintaining the same highly evolved handle ergonomics.

Because the Reverse is intended to function in both edge-in and edge-out configurations, its sheath must also support the full scope of carry positions. By maintaining careful symmetry at the juncture of the blade and handle, the Reverse fits its custom-molded Boltaron sheath securely in both edge orientations. The symmetrical sheath also allows the angle-adjustable G-Clip mount to be attached to either side to support both belt and inside-the-waistband carry on either side of the body.