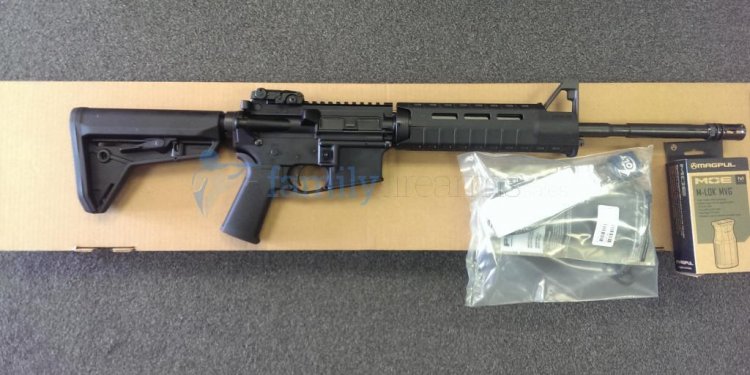 The first variant to be fitted with a a forward assist (which has a tear-drop shaped plunger head as opposed to the round plunger used on later rifles). This is the only upper to feature a forward assist without brass deflector.

An intermediate receiver that was an A1 receiver with the addition of a brass deflector behind the ejection port. It can be distinguished from the A2 receiver by its simpler rear sight. This upper was the one that was chosen by Diemaco (now Colt Canada) for the C7 rifle and C8 carbine. It was also commonly used on the Model 723 and 733 carbines.

This upper was first implemented on the M16A2. It notably differs from its predecessor, the A1 upper, by the addition of a brass deflector and a more complicated range adjustable rear sight. Also replaced the A1's 'teardrop' forward assist button with a round one.

Essentially an A2 upper with the fixed carry handle replaced with a MIL-STD-1913 scope rail. It can often be seen fitted with a carry handle that is most often of the same design as the A2 upper. This is the upper that is used on the majority of current military, law enforcement and civilian rifles.

A unique upper receiver fitted only to the Model 750. Externally it appears as an A2 upper with the forward assist omitted (being an open bolt weapon, a forward assist would be pointless).

A unique upper receiver fitted only to the Model 950. Externally it appears as a flat top upper with the forward assist omitted (being an open bolt weapon, a forward assist would be pointless).

The upper receiver used on the 9x19mm submachine guns and carbines is actually a modified slickside upper (a forward assist is not necessary due to the simpler and more reliable blowback action), fitted with a distinctive semi-circular brass deflector over the rear of the ejection port (which is pinned to the receiver and removable, as opposed to the integrally forged one found on 5.56x45mm rifles) and a correspondingly shortened dust cover. The reason for this enlarged deflector is due to the fact that as the SMG is a straight blowback weapons a relatively large amount of gas blasts out of the ejection port, which would be uncomfortable for a left handed shooter if not redirected.

A flat top variant of the original SMG upper with the same removable brass deflector, this is the upper which is used on the current range of submachine guns and carbines.

A unique upper receiver found only on the M231 firing port weapon. It is identical to the slickside upper used on the original M16 but features no rear sight, being designed to be aimed using tracer fire. It does however retain the carry handle that the rear sight is normally mounted in along with the windage direction arrows for adjusting the absent sight, due to it being made from a regular slickside forging without the final machining for the rear sight.

Used only on the AR-15 prototypes and the original M16, the slabside lower can be identified by the lack of any ridges on the right side of the weapon. The push pin at the front of the lower receiver either has a flat round head, or a round head with a circular divot in the centre.

Most notably used on the XM16E1, although also used on a number of contemporary carbines and experimental weapons, the partial fence lower features a horizontal ridge under the ejection port, a captive push pin at the front pivot, and an unfenced magazine release button. The term partial fence is a misnomer as the ridge on the side of the receiver is unrelated to the magazine release button, but is instead a housing for the detent spring which retains the new push pin. The partial fence name has only been applied retroactively in relation to the later full fence lower.

The full fence lower is the standard receiver used on all AR-15s since the M16A1. It can be identified by the raised fence around the magazine release button on the right side of the weapon which is designed to lessen the chances of accidentally releasing the magazine. The design of this lower was upgraded with the adoption of the M16A2 featuring strengthening around the front and rear receiver push pins and fire selector marking on the right side of the receiver. However, due to the difficulty in identifying them from a distance and the fact that different manufacturers use slightly different designs (such as strengthening around only the front push pin or omitting the selector markings on the right side of the weapon), these have been treated as one variant for the purpose of identification. The full fence lower (both A1 and A2) is also the receiver used on Colt's 9mm SMG. For this purpose it is modified with several holes drilled in the side, which are used to pin spacers in place to hold the smaller 9mm magazine in the standard 5.56mm magazine well.