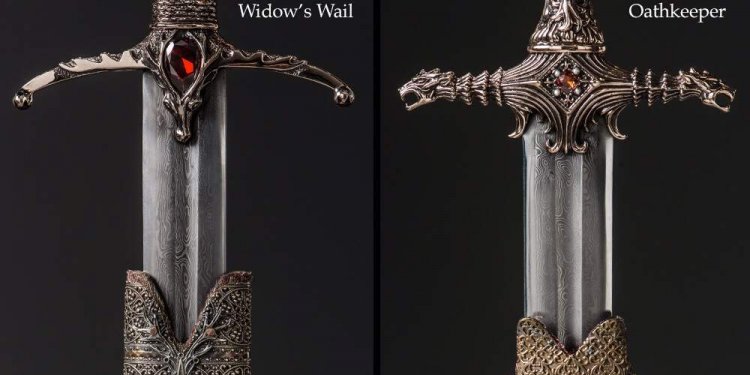 Prior to season six of Game of Thrones we examined important historical events from the complex and controversial history of Westeros—anything that might tell us something about the story going forward. With the season now in full swing, we’re continuing our deep dives by looking at what we know about characters and events that are new and important to the show. However, if you think that theories and information from the books will cut you deeply, then you might want to stop now and avoid the doom of spoilers.

Part 9: The Dosh Khaleen and the Stallion Who Mounts the World Prophecy
Part 10: The Children of the Forest and the White Walkers

When Sam took his family’s ancestral sword in the middle of the night, he didn’t just take an heirloom of House Tarly—he took one of the most valuable items in the entire known world. He took a sword made of Valyrian steel.

Heartsbane, the name of the Tarly family sword, is certainly not the first Valyrian steel sword we’ve encountered on Game of Thrones; in the pilot, we saw Ned wield the House Stark Valyrian steel sword Ice to execute a deserter of the Night’s Watch. But following Sam’s taking of his Lord father’s sword, coupled with the fact that we know how they are one of the only two known methods of killing White Walkers, they are beginning to feel like they might be even more important as we move closer to a showdown between the living and the dead.

Valyrian steel is so valuable in part because there is a finite amount of it left. Prior to the Doom of Valyria, the disaster that saw the annihilation of the dragonlords of the world—save for the Targaryens—the steel was made in the Valyrian Freehold (the Valyrian Empire) using dragonfire and magic spells.

It’s the magic cast right into it that also makes Valyrian steel as valuable as it is, because it is lighter, stronger, and never loses its edge. It is far superior to the steel made in even the greatest castles of Westeros. Swords made of it even look different than other weapons, with a rippled pattern created from being folded over on itself thousands of times.

The secrets of forging Valyrian steel have been lost to time, but a few weaponsmiths in Essos can reforge it, which is just what Tywin Lannister had done with Ice (we’ll come back to that).

We don’t know the specifics behind the making of Valyrian steel, or exactly the kind of magic that went into making it. But we have seen that they are capable of killing White Walkers, so it’s safe to say they contain a very powerful magic, and possibly that the use of drgaonflame to forge it plays a role in that (Sam thinks old references to dragonsteel might mean Valyrian steel).