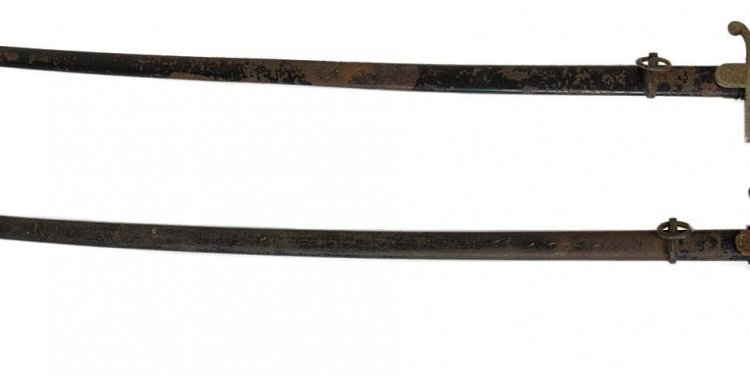 The Executioner sword was a symbolic and ‘facilitator’ of judicial law. Many courtrooms displayed executioner swords on their walls. Their presence however was not solely symbolic, since it had a concrete purpose in the decapitation of the condemned. The blades of Executioner swords were typically engraved with vivid imagery of torture and punishment.

These swords generally featured broad, flat blades that end not in a point, but as a distinctive flat edge. The blade is heavily decorated as many executioner swords would be; and while in some cases the sword would be inscribed with the executioner’s name, in this case the inscription translates as “I spare no one” – a brutal message for criminals facing the executioner sword’s edge.

Historically, medieval and renaissance swords were weapons intended for close-quarters combat. Edge, tip and guard were constructed in a way to maximize the sword’s versatility and therefore the human-damaging potential.

This was especially true with the thrusting capabilities of the medieval swords at the dawn of the medieval period. The Executioner sword however, was intended to decapitate its victims. Hence the tip, unlike military swords, was rounded. Some suggesting the symbolic form of an abrupt end of life.

Faithfully crafted after a later historical model that survives in the Medieval Crime Museum (Mittelalterliches Kriminalmuseum), the ‘German Executioner sword’ is an imposing and powerful piece. Hefty, yet carefully balanced for its intended purpose, the 2.5 wide blade delivers powerful cutting blows. The blade is individually hand crafted from 5160 High Carbon steel and acid etched with stunning complexity, as the original compelling design.