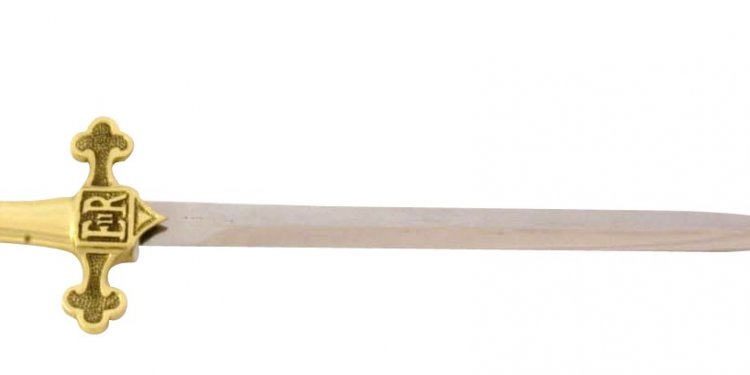 The British House of Commons consists of two distinct sets of opposing benches separated by a center aisle. As of 2010, it seats 650 members. “Some Traditions and Customs of the House”, produced by the House of Commons Information Office, corroborates the reference to red lines from O’Brien and Bosc and the notion that the government and opposition benches remain two swords apart (though not an inch more): “They may not speak from the floor of the House between the red lines (traditionally supposed to be two sword-lengths apart).” However, the House of Commons Information Office does not list any precise measurement like the 396 centimeters that O’Brien and Bosc claim. Certainly, the length of swords would have varied depending on the type of sword and the period in history – but the distance between the government and opposition benches in the Canadian House of Commons is clearly much greater than that in the British House of Commons – one need only look at the photos. For instance, during the weekly Prime Minister’s Questions (PMQs), the prime minister and leader of the opposition stand directly behind the Clerks’ desk and the mace and speak into the microphones by their respective despatch boxes. But in the Canadian House of Commons, the prime minister and leader of the opposition stand nowhere near the Clerks’ desk during their exchanges in Question Period. There are a few possible explanations to take these different interpretations of “two swords” into account: either the Canadian sources are wrong, or the British House of Commons was expanded through the addition of a new front bench, thus narrowing the gap between the government and opposition. Or Canadian parliamentarians wielded massive Claymores, while their British counterparts settled for more modest sabres!

Our southern hemispheric Commonwealth cousins have both made significant adaptations to the basic Westminster model (more on that later), as well as noticeable changes to their lower houses. They use refer to their lower houses by a different name : as “House of Representatives” instead of the traditional moniker “House of Commons”, perhaps in order to avoid the pejorative historical and colonial associations with “commoner”. The Australian House of Representatives consists of 150 members, who sit in a horseshoe configuration, which breaks with the British tradition. The government and opposition front benches form a single, unbroken line; and like in the British House of Commons, the Australian prime minister and leader of the opposition address each other during Question Time from their respective despatch boxes and microphones. However, the overall distance between the Clerks’ table and the front benches are roughly the same distance apart as ours. The backbenchers sit in pairs in what appears to be a bench-desk hybrid. (The Australians always have to be different). The New Zealand House of Representatives, which seats 122 members, combines the desks of the Canadian House of Commons with the horseshoe configuration of the Australian House of Representatives; their front desks are also roughly the same distance apart as ours, and like us, they don’t use despatch boxes. The partial center aisles of their Houses of Representatives look about 396 centimeters wide.

Turning back to the Canadian House of Commons, the parliamentary tour guide would also mention that the desks accommodate the 308 members of the House of Commons, and that Parliament re-evaluations the number of Commons seats every ten years, which has so far always resulted in adding more desks. But as anyone can plainly see, the House of Commons has reached its capacity and can accommodate no additional desks under the traditional arrangement that supposedly requires that the government and opposition sit 396 centimeters apart. The Harper government introduced Bill C-12 in the 3rd session of the 40th Parliament, which would have expanded the House of Commons by 30 seats in order to represent more fairly the growing populations in British Columbia, Alberta, and Ontario. But where would all those additional desks go? The sheer physical limitations of the House of Commons preclude the inclusion of more desks. Perhaps another row of desks could be added in the back, but then it would block off the corridor behind the curtains; and the addition of a new row in the front would narrow the 396-centimeter gap.

Now that the Harper government commands a majority of the House, this bill will probably be re-introduced in the 41st Parliament. In order to accommodate those additional 30-odd seats, which would probably become official around 2014, the House of Commons should switch to benches like Westminster. In addition to their more efficient use of space in the chamber, benches would also deprive members of the ability to bang loudly on the desks during Question Period. The addition of these new seats also happily corresponds to Public Works’ scheduled renovation of Centre Block in 2015, so the renovation could easily accommodate the conversion from desks to benches! And for good measure, the prime minister and leader of the opposition should also address each other across despatch boxes. I shall explain in a later post why the Canadian House of Commons ought to scrap the current format of Question Period and adopt the British model of Question Time and Prime Minister’s Questions in its entirety.