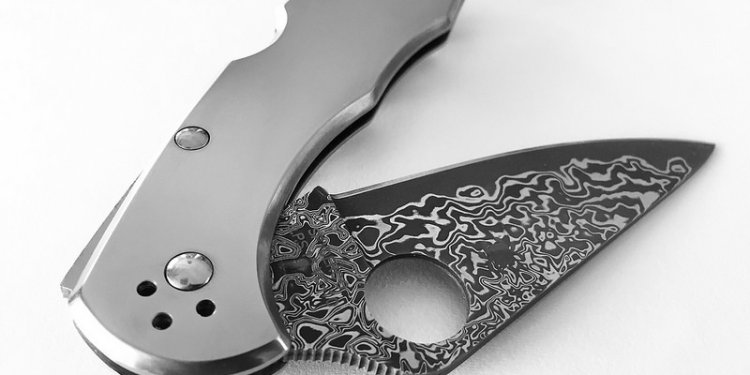 The Reverse™ is an exciting new fixed-blade knife that represents a literal meeting of the minds of two renowned personal-defense instructors who are also veteran Spyderco collaborators. Craig Douglas, aka “Southnarc, ” is a veteran law enforcement officer, an expert martial artist and a highly respected close-combat instructor. Best known to Spyderco enthusiasts as the designer of the popular P’Kal folding knife, he is also a leading proponent of “reverse-edge” knife tactics in which the knife is held so the cutting edge faces back toward the user. This style of grip allows the body’s major muscle groups to power the edge and generates devastating cutting power.

Michael Janich is a noted author and instructor and a leading authority on all aspects of personal defense. He is an advocate of “edge-out” knife skills in which the edge faces away from the user. Janich’s system of Martial Blade Concepts (MBC) focuses on using the knife to cut key anatomical targets to immediately disable an attacker.

Several years ago, Douglas and Janich were both featured instructors at the NE Shooters Training Summit in New Hampshire. After several students suggested that their different approaches to knife tactics made them rivals in the tactical community, the two instructors (who are actually good friends) decided to prove them wrong. They brainstormed to co-design a knife that would work equally well edge in or edge out and ideally allow students to understand and appreciate the logic of both approaches.

After agreeing that the basic form of the knife would be a fixed-blade version of Douglas’ P’Kal folder, the two defined the other design features of the knife and sheath that they both felt were critical. Janich then translated these into a drawing and ultimately a handmade nylon concept model, complete with molded Kydex® sheath. After a few additional refinements, they presented the idea to Spyderco and the rest, as they say, is history.

The defining characteristic of the Reverse—and the inspiration for its name—is its unique reversible handle. It consists of two textured black G-10 scales that are carefully machined to create a hollow cavity for the blade tang. The scales are secured to the concealed tang, which extends two-thirds the length of the handle, by three sets of bolts. By removing the bolts with the Torx® T-8 wrench included with every knife, the scales can be easily removed and mounted to the tang with the blade’s edge facing either direction. Whether you prefer edge-out or reverse-edge tactics—or you just want to experiment with either one—the Reverse allows you to quickly and easily configure your knife accordingly while maintaining the same highly evolved handle ergonomics.

Because the Reverse is intended to function in both edge-in and edge-out configurations, its sheath must also support the full scope of carry positions. By maintaining careful symmetry at the juncture of the blade and handle, the Reverse fits its custom-molded Boltaron® sheath securely in both edge orientations. The symmetrical sheath also allows the angle-adjustable G-Clip™ mount to be attached to either side to support both belt and inside-the-waistband carry on either side of the body.

Great minds don’t have to think alike to achieve something special. Putting aside the dogma and thinking together often yields better results. The Reverse is proof of that.

Changing the edge orientation of the Reverse is a simple process that only takes a few minutes. These step-by-step instructions will walk you through the process in detail and explain some of the finer points of the design and its hardware.

The primary tool needed for this process is a Torx® T-8 wrench, which is included with every Reverse knife. Although not always required, a 3/32-inch flat punch or similar tool is also helpful to push the bolts out of the handle.

Place the knife on a computer mouse pad, towel, or similar padded surface so the screw heads of the handle fasteners face up and the blade faces away from you. Hold the handle down securely with one hand while you use the Torx tool with the other hand to loosen and remove all three screws. Starting closest to the blade, use the Torx tool or the tip of the flat punch to push the female side of each handle bolt out the opposite side. If they are stubborn, tap the punch lightly to loosen and remove the bolt. Then, separate the scales and remove them from the tang.

Once you have removed the scales, turn the blade over and reverse the disassembly process to reattach the handle. Note that the female sides of the two handle bolts closest to the blade are “D” bolts with one flat side. They fit the “D-shaped” holes in the tang to keep them from turning and may need to be rotated during assembly to align them. For reference, the flat side of the “D” faces the spine side of the blade. Also, the female portion of the bolt nearest the handle butt is different than the other two. It has a special fluted texture around the head that grips the G-10 scale to prevent it from turning. This bolt should only be used in the handle hole nearest the handle butt.

To prevent the handle screws from loosening, we recommend applying a drop of temporary thread-locking compound to the threads of each screw before final assembly. Once your handle is configured to meet your needs, carefully remove the blade sleeve or protective tape and place the knife back in its sheath.

By following these simple steps, your Reverse will “live up to its name” and give you the best of both worlds in defensive knife options.

Spyderco began exporting knives and accessories in the early 1980s. Today we export to 65 countries and all continents except Antarctica, although there are scientific groups there using our knives. Conducting business from afar is easier in today’s technological climate than it was 30 years ago, but nothing is more business-friendly than face-to-face meetings and communication when introducing the Spyderco brand to the world.

Each Spyderco crew member has a hand in making our knives and sharpeners globally available. Several times per year employees hit the road for meetings with international dealers, distributors and end-line users. This month the Spyderco crew headed to Europe where they split into two teams to cover more ground. One hosted a meet-up of nearly 100 Spyderco fans, custom knifemakers and international media in Amsterdam, the Netherlands. The other Spyderco contingency braved winter in Sweden for a meeting with our longtime distributor in Stockholm, Rocky Mountain. The crew reconvened...