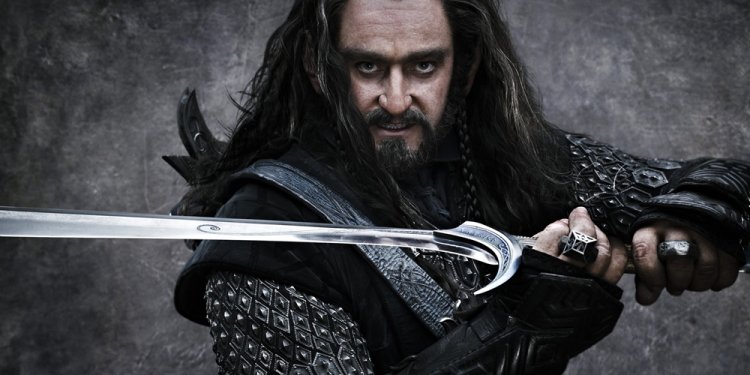 Weapons from Lord of the Rings


"Therefore Thingol took thought for arms, which before his people had not needed, and these at first the Naugrim smithied for him; for they were greatly skilled in such work..." —, "Of the Sindar"

Throughout their existence, the so-called Naugrim, or Dwarves, have been experts at making and using various weaponry, with no equal. This skill comes from the Vala Aulë the Smith, who crafted the Dwarves at the beginning of Arda. The list of common Dwarven weaponry goes on and on, and from their very origin each type, including bows and crossbows, has retained a unique Dwarven identity and respect among other cultures.

A Dwarven throwing axe used in the Third Age

The Dwarven axe is the most famous and as a result the standard weapon for any Dwarf soldier. The axe can be a combination of various types, either large or small, curved, doubled headed, smooth or of a throwing variety. Used extensively throughout the wars fought by Dwarves, the axe probably came into use by the time Khazad-dûm was founded, somewhere in the Ages of Stars. The idea of the use of the axe is to drive forward while attacking; therefore, it is not good in defense. Being a weapon that is hard to control, the axe takes great skill to master, which shows the skill and temperament the Dwarves have in warfare. Indeed, the axe was probably the first real weapon used by the Dwarves, most likely being first made out of stone and then iron. As time went on, Dwarves were constantly changing the way they made weapons. With the new use of steel, Dwarves made hardier and overall better axes, but the newfound metal Mithril changed everything for them. With Mithril, Dwarves were able to reach their peak in making weapons. Suddenly, axes began taking on almost magical qualities, being able to slice through almost any metal. The metal Mithril may have completely changed the way Dwarves made and subsequently used their axes, but the magical metal was hard to find and even harder to harvest. Thus, most Dwarven axes continued to be made of other metals like steel.

The heavy axe was the main weapon of the Dwarves. It is typically made from steel and utilizes a large, long handle. There are runes marked on the blade and the blade can be one, or double-headed. Among the characters, Gimli uses different kinds of battle axes, most notably after the journey through Moria.

A Dwarven sword, used by Fíli

The Dwarven sword is less commonly wielded than the axe. Such famous Dwarven figures like Thorin Oakenshield have wielded this weapon to great effect. As with the Elves, the Dwarves craft their swords expertly and the weapon has evolved as the use of materials to make it has changed. With the use of iron, the Dwarven sword was not unlike others, being either a longsword or a pointed shortsword. With the use of steel, the sword took on a more advanced look, being broader, heavier and sharper. As with the axe, the Dwarven sword reached its peak when the use of Mithril came about. It still was primarily made out of steel. It is easier to handle than the axe, which leads younger Dwarven warriors preferring it over the axe, or as a side weapon.

As seen from Peter Jackson's The Hobbit film trilogy, the Dwarven swords have runes marked on the wrapped leather. Among the characters, Thorin Oakenshield, Balin, Fíli, Kíli, Bofur, and Dori use Dwarven swords.

Dwarves more famously used a axe and sword in close combat but on certain occasions they have been known to use spears as a weapon. Bifur uses a boar spear as a weapon throughout The Hobbit trilogy. Its blade is a tall triangular shape. This spear can be used very well for parrying, stabbing, and throwing. Spears are also used by Dwarves to deadly effect. These are especially dangerous when in the hands of Dwarven infantry. The Dwarven army that marched to Thorins aid led by Dain carried many spears and they used their spears in their manoeuvres. When charging they were very effective behind their shield wall. Some Dwarves were even taking down war beasts with one mighty throw of a spear.

Certainly, Dwarves make use of other weapons than the sword or the axe. The mace, spear, flail, warhammer, mattock, and many others have their place in Dwarven armies, however the use of the bow, as stated, is not common among Dwarves. There is not much record stating if any famous Dwarves wielded these weapons, but it is known that they were issued to many warriors who used them to deadly effect. Thorin and company used bows given to them by Beorn in Mirkwood, and Thorin was the only dwarf of the company to hit the stag they saw implying skill with a bow. Perhaps the Dwarves are best known for their armour above all other things battle-related. As with their weapons, Dwarven armor has evolved as the ages have progressed. The earliest metal armor was probably bronze, but that is not recorded. A better example of early Dwarf armor would be iron or steel chain-mail, which was invented and used by the Dwarves to great effect by the time of the Wars of Beleriand. Of course, iron or steel helms and shields would accompany this chain-mail, possibly along with plate armor. Dwarven helmets are recorded to have covered the face, with the use of a forged mask. This mask was particularly helpful when fighting Dragons, as the face would be shielded from the flames, thanks to the expert craft of the Dwarves.
Source: lotr.wikia.com