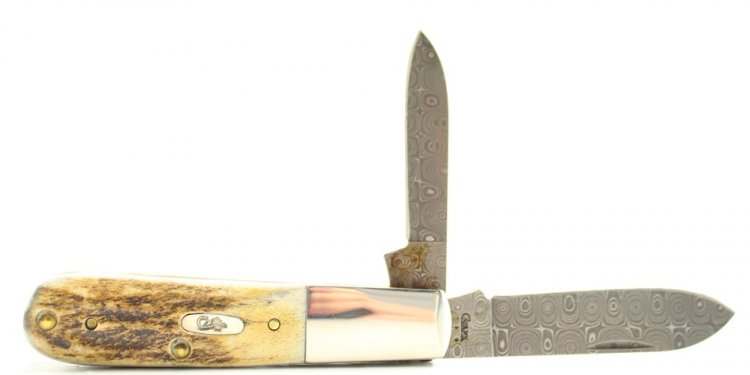 1. What is a “Barlow” style pocket knife?

A barlow style knife has one or two blades, a huge metal bolster, and a comfortable tear-drop shaped handle. The blade or blades are attached at the small end of the handle. Even though the first barlow knife was made in Sheffield England in the 1600’s, it was made by several American shops soon after, and has become just as American as “apple pie”. George Washington was known to have a barlow knife. Mark Twain referred to a “real Barlow” in his Tom Sawyer and Huckleberry Finn in 1876. Barlows have long been gifts, treasured by young American boys. At least one song was written about the barlow knife.Mark Twain wrote about the barlow knife in Huckleberry Finn and Tom Sawyer…

“Mary gave him a bran-new “Barlow” knife worth twelve and a half cents; and the convulsion of delight that swept his system shook him to his foundations. True, the knife would not cut anything, but it was a “sure-enough” Barlow, and there was inconceivable grandeur in that – though where the Western boys ever got the idea that such a weapon could possibly be counterfeited to its injury, is an imposing mystery and will always remain so, perhaps.”
– The Adventures of Tom Sawyer

“All the stores was along one street. They had white domestic awnings in front, and the country-people hitched their horses to the awning-posts. There was empty dry-goods boxes under the awnings, and loafers roosting on them all day long, whittling them with their Barlow knives; and chawing tobacco, and gaping and yawning and stretching – a mighty ornery lot.”
– Adventures of Huckleberry Finn

The history of the barlow knife has been difficult to trace. At least four American Barlow families have claimed that they invented the barlow knife. According to Laurence A. Johnson (1) the Barlow knife was probably first manufactured by Obadiah Barlow at Sheffield, England, around 1670. (2) Obadiah’s grandson, John Barlow, joined the business around 1745 and it was he who was chiefly responsible for developing the exportation of the Barlow knives to America. Another source says the barlow knife was also made by Luke Furnace of Stannington, which in the eighteenth century was a small village on the outskirts of Sheffield. Luke Furnace’s name occurs in the Sheffield directories from 1774 and 1787, but not in the 1797 directory, so he was presumably dead by then. He put the mark “1760” on his knives. The original Barlow, after whom the knives are named, was working in Sheffield at the same time as Luke Furnace.An 1823 directory of Sheffield, England cutlers (knife makers) shows Samuel Barlow on Neepsend (Street). In the Sheffield suburb of Stannington, Barlow Bros. is listed as a cutler. (3)

The barlow knife was designed to be tough, and to be affordable. To keep the price low, the blade was high carbon steel, and the handle was bone, and not much time was spent in polishing it. To make it tough, the bolster was big and thick. The original barlows had only one blade. Now they have two, and more care is taken in finishing and polishing them.

John Russell may have been the first American to manufacture Barlow knives. The John Russell Company, now the Russell Harrington Cutlery Company of Southbridge, Massachusetts, first mass produced Barlow knives at their Greenfield Massachusetts, factory in 1875. They were called the Russell Barlow knife and instead of the word BARLOW on the bolster, they were stamped with Russell’s mark, an R with an arrow through it. Today these Russell Barlows are valuable antiques. (2)

Now several companies make barlow knives, and they are sold on this web page: Case, Bear & Son, Boker, Robeson, and Rough Rider all make the barlow style knife currently. The Russell barlow knives were discontinued around 2009.

2. What is the Barlow Company?

The Barlow Company, which made pocketknives, among other quality gift ideas, started about 1930 in the United States. In 2003, Barlow stopped giving their products a Lifetime Warranty. About 2005, Barlow was bought by promotional product giant, Norwood. Norwood has kept the Barlow line in tact, but is gradually using their “Norwood” logo in place of the “Barlow” logo. Barlow-Norwood sells only through promotional products distributors, like Advantage-Advertising, LLC. Their knives are available on owned by Advantage-Advertising, LLC. Ironically, Barlow-Norwood does not currently produce a barlow style knife, but they have in the past, and could possibly resume in the future. Norwood has many fine business gifts and promotional corporate gifts available with yourlogo imprinted on them. Included are metal key tags, money clips, pocketknives, multi-tools, tape measures, picture frames, and clocks. Some of these items are available on www.advantage-advertising.com