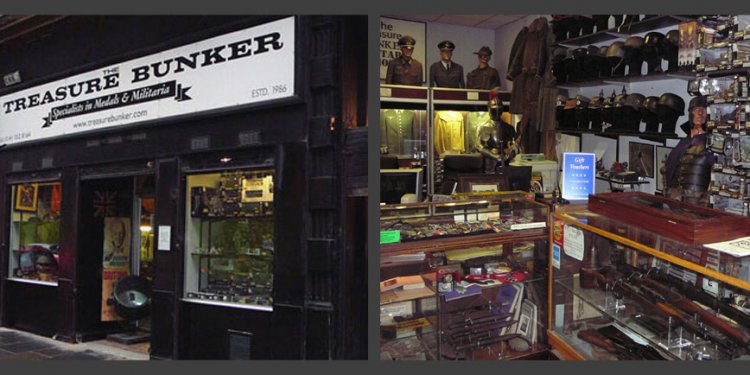 The Lanes Armoury is based in the very centre of the world famous Brighton Lanes and owned by the Hawkins brothers, Mark and David.

Our History:
Mark and David have between them over 55 years experience in the profession, frequently featuring as both resident and visiting consultants to numerous television programmes on Satellite Television and the BBC. They feature in numerous famous reference books on Antique Collecting including The Miller's Guides to Antique Values, also appearing in numerous glossy magazines and journals on a regular basis. They were nominated and short-listed for the British Antique & Collectors Awards as the best Antique Shop in Great Britain. In their business they are the successors to the world famous name of Hawkins, historically one of the oldest and largest dealers in the trade of Antiques and Collectibles in Europe. The origin of the Family Business goes back to the Reign of King George, but the brothers Mark and David are the first generation of the family to exclusively specialise in Arms, Armour, Militaria, and Books.

Our Location:
The Lanes Armoury is in Brighton, the glorious south coast town, made famous by the Prince Regent, and his Palace, the Brighton Pavilion. Brighton [in it's old name] was recorded in the Domesday Book [ the 11th century census of England ] but it took 700 years to obtain its fame, thanks to His Royal Highness and his Mistresses. They are based in the very heart of the old town, which contains the famous  Lanes', which are converted Fisherman's Cottages, it is now an exclusive pedestrian shopping region of high class Restaurants, Jewellers, Designer Stores and Antique Shops.

Our Premises:
In the very centre of the old Lanes, in a three storey 16th century building, adorned distinctively in Guards Red . It is a beautiful shop that is frequently described, by its visitors, as possibly the most amazing in Europe. Within its portals is a veritable Treasure House of Arms, Armour, Militaria [from pre-Christian to the current day] and an amazing selection of thousands of Military and History Books. They have thousands upon thousands of items, from Suits of Armour, Samurai Weapons, Bronze Age Swords, to Duelling Pistols, American Civil War Swords, Long Guns & Revolvers. They also sell European Medals, and hire/sell Deactivated Arms, including, numerous types of WW2 Machine Guns, in fact practically every imaginable item from a Cap Badge to a Royal Navy Cannon.

Our Aim:
Over the decades their client list has expanded from Presidents to Postmen, from Royalty to Reverends but they pride themselves on principals of courtesy and assistance that is equal for all. Every sale is important, as is every client. Every item of weaponry is sold with the benefit of full value return, against a future increased value sale. All mail order credit card sales are sold on approval [return in seven days] in original condition. One day every item of stock will be listed and detailed on this web site, however, at present, the stock [especially of books] is so huge and varied it will take some time before this will come into effect, so for now please contact them with your needs or wants, or even just a basic outline of something you are looking for, and they will do their utmost to satisfy your desires. The company also offers an Inspiration Service for those in need of a gift, or even an idea for the new collector, who may wish to start collecting without knowing in what direction to proceed. They can guide you through a few simple inquiries to find the perfect and unique gift or the start of a collection. Every day they buy and sell little pieces of history, there is no other sphere of collecting quite like this, household antiques and collectibles may be of a certain era, but a Sword, a Pistol, or a Helmet you can buy here, may have once been used by maybe a soldier in Napoleon's Imperial Guard, or a Samurai Warrior in the Great Warring era of Japan, or possibly a Commander of a German U-boat in WW 2 . There is nothing quite like Arms and Armour for stimulating the imagination.