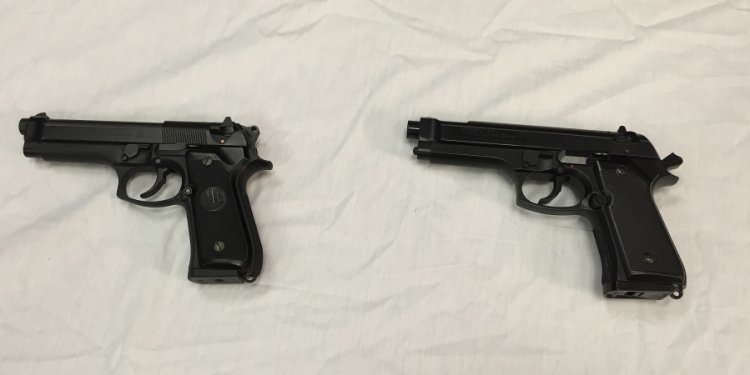 To a passersby along the 101 Freeway near Agoura, the two men standing on an overhead bridge Sunday evening conjured an image of terror.

One wore full military fatigues carrying what appeared to be an assault rifle. One had a gas mask.

The fears proved to be unfounded. The incident turned out to be a case of homegrown moviemaking, not a potential freeway ambush. Even the weapons were fake.

Both men later told investigators that they were film students at Moorpark College completing a class project, said Lt. A.J. Rotella of the Sheriff's Department.

But when the calls first came in about 5 p.m., sheriff's officials prepared for the worst. A helicopter was deployed, along with multiple units from the California Highway Patrol and the Sheriff's Department, Rotella said.

Both directions of the 101 Freeway were shut down.

"The freeway was completely shut down for 10 minutes, which in L.A. time is quite a bit, " Rotella added.

Both men immediately cooperated with law enforcement. As instructed by the commands issued from speakers on the helicopter, they walked with their hands up toward the throng of deputies crowding near the end of the bridge.

The students - Taylor Hubenthal, 19, and Chase McIntyre, 20 - were arrested and booked at the Sheriff's Department's Lost Hills Station on suspicion of several misdemeanor charges, including brandishing a replica firearm and causing a false emergency. They were bailed out of custody later that evening, authorities said.

They are residents of Ventura County.

“While the intentions of these two individuals might have been harmless, the fact that anyone would appear in a public place displaying a replica firearm is troubling, " Sheriff's Department Capt. Patrick S. Davoren said. "These two men put themselves and our community at risk."

The two men were found with a replica assault rifle, a replica handgun, video cameras and the gas mask, Rotella said.

"It appears on the surface that this is innocent in nature, " Rotella said. "Obviously they should have gone through the process to get a permit, to prepare a community for a film. That was not done."