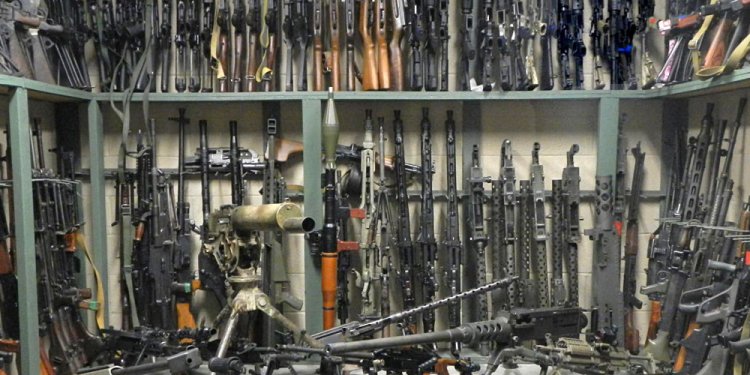 Oh for heaven’s sake. Look at all the NRA-inspired answers. All dreadfully similar. And - before I get jumped on - some aren’t actually wrong. But at the same time,

But then, you should have known that. Certain questions are going to produce certain answers. If you didn’t know that you were asking a rhetorical question - well, now you do. But I love answering rhetorical questions. My answer is no - because guns aren’t the issue. The issue is creating a situation in which no reasonable person sees any need for the damn thing, other than having some fun at the range - or knocking over a delicious moose from a safe distance. (A quarter-mile seems about right to me!)

But all of these answers revolve around scenarios in which you might suddenly need a weapon.

We have all kinds of ways to avoid situations in which we might suddenly need weapons. One of the most important tools we have is called “civilization” with it’s expectation that we act toward one another civilly. The people who are unwilling to act as if they are civilized are considered to be bad people, or even criminals. Therefore, most people do not act in alarming ways, because they fear being ambushed by a moose in suburbia. As a consequence, people who do behave in alarming ways are generally dealt with by people trained to deal with them - so you don’t have to. That’s the whole point and why you grudgingly pay taxes.

Although it does happen. People are set upon. It’s not common, but at the same time, it’s not rare enough - as are shark attacks and lightning strikes. This is why we devote a lot of time and effort and money to studying sharks and lighting, unlike the epidemiology of gun violence. Sharks and lightning, you see, do not have lobbyists, so the government is not prevented by law by looking into these matters.

But it hasn’t prevented other people from looking and the numbers are alarming. Alarming enough that those who are afraid of having their guns grabbed are expressing a reasonable concerned. I am a lover of guns myself, I feel their pain, but it’s self-inflicted. Civilized people don’t get in the way of civilization.

Never mind the argument that it’s the duty of a citizen to deport themselves civilly; getting in the way of civilization is a far more certain doom than finding an alligator in your swimming pool. It’s unwise to be seen as part of an armed, occasionally violent and very belligerent minority that intrudes in any discussion about what might be done about mass shootings as if it were a call for mass castration. That sort of behavior and language is uncivilized. People who think it reasonable to show up at a state legislature armed for battle might consider all kinds of violent things “reasonable.”

It’s not unreasonable to perceive something like this as a threat. Frankly, I wonder how this maroon and the guy beside him with a backpack filled with god knows what are alive. Because they shouldn’t be. Making a point of alarming a professional with a gun is about as smart as throwing darts at a moose in mating season.

And by the way, if you happen to be confronted by a moose or an alligator - the odds are that whatever gun you have on your hip isn’t big enough to do the job properly. Which means that you are now dealing with a wounded and exponentially more dangerous situation.