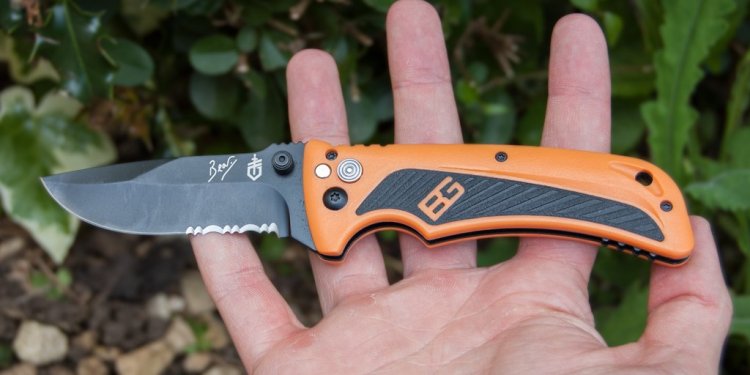 Always wanted to buy but failed since it has high price due to the Turkish currency. My dad give this knife to me as a gift; tough, handsome, extremely sharp, nice grip, safe, opened by hand as previewed after few practice, and the blade is not moving up and down or sides. To cut a long story short; it's as precise as a high end swiss mechanical watch. All parts and features functioning as it has engineered to. And when it comes to the price, you'll see it deserves it. You pay for the knife itself; not for Bear Grylls. It has Bear Grylls on it because it deserves to have with its survival efficiency!!

I'm on my second/third one of these. These knives are awesome! The first one I used the tip to try & unscrew a small screw (dummy) & the tip broke. I still have it as a back up. My second one the release button popped out while I was cutting a box. Sent it to Gerber & they sent me a new one within 2 weeks. Great customer service! Love this knife & the best feature is the assisted open.

I bough this knife off Amazon from a trusted seller and had some issues with it. So I ended up with a counterfeit. So I told gerber and they sent me this new one that's feels and works great. I'm really happy with this knife and still use it everyday. The handle is gripy even when wet.

But if you get one that's feels weird call and check the number on the blade. Thanks gerber for making a solid knife that dosent cost 200$

In addition to the plunge lock that locks the blade in place when open, the knife also features a "safety lock" that is intended to lock the blade closed when not in use. The problem is that the internal metal rod that makes up the lock just flops back and forth whether it's open or closed, engaging and disengaging itself without any input from the user. The result is that it often times fails to lock the blade closed and likewise often times inadvertently locks the blade open even when the plunge lock is being depressed.

I used a small star driver to remove the safety rod and now the knife functions properly. I've owned many other Gerber AO knives and I can reassure you that the blade of this hacked Bear Grylls knife is no more likely to open unintentionally than other Gerber AO knives that don't have a secondary safety lock.

Other than that the knife blade is easy to open and close reliably with one hand, The molded handle provides for a secure grip. The partially serrated blade doesn't hold an edge very long but it's very easily resharpened. No blade wobble. Overall a decent knife, especially for the $20 that I paid for it from Amazon.