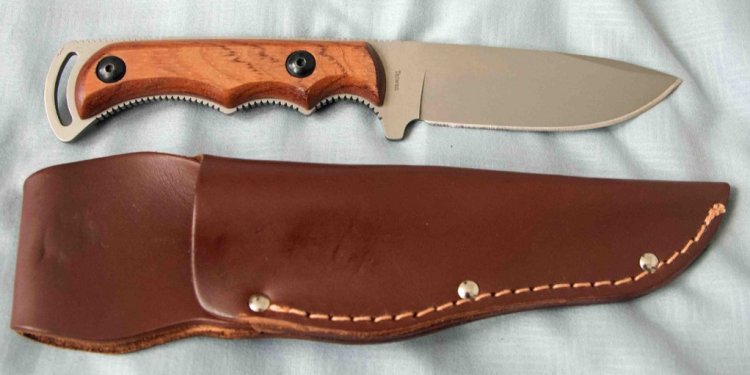 I bought this exact Gator with the drop point blade and 154CM steel to be my new hunting knife this year. I was able to find it online for half the listed MSRP.

When I first got it, it was pretty sharp. Overall build quality impressed me. Came in a nice pouch that can go on a belt. Very well made and solid. Still, I touched the blade up some with my ceramic files and it was ready to shave in no time.

Actual use? Well, I had it with me through the whole Fall hunting season here in PA this year and it has seen action. Maybe a tad larger than it needs to be, but I was able to dress and skin game from rabbit/pheasant size clear up to a 140# whitetail. May be too large for squirrel, but I don't hunt squirrel.

In total, I dressed 4 pheasants and 1 whitetail with this Gator. The high quality steel blade cut through like butter. The synthetic handle material allows a nice sure grip to be maintained even when soaked in blood. After dressing my deer last Saturday, I cleaned the knife really good and checked it for a retained edge which was still sharp enough to shave arm hair with.

Can't beat this knife for the mid $30 price tag it can be found at. Did I mention this model was made in Oregon, USA? Couple that with the 154CM steel and you have the best inexpensive hunting knife on the market. I am very happy I went with a Gerber and expect it to last many decades.

I bought my first Gator Drop Point in 2005 and became so attached to it that I bought another in 2012. My only complaint is that in attempting on several occasions to reach Gerber so I could return the blade to have the factory edge restored and to buy the optional blades they offered, I never received a reply. Disappointing.
My two Gators are great knives. I don't want anything else. The beauty of these older models is the thumb groove, which makes one-hand opening a breeze. I see the new models no longer have these grooves. That will likely prevent me from buying another, unfortunately.

Overall, the two Gator drop points I own are the best knives I could hope for. Perfect for me.

I own many different knives. Personally I am very keepy with sharpening them.
Bought a gator last year in Canada and used at home in Argentina a couple of times.
Last Saturday I tried to castrate some calves whith this gator and after two cuts trough the hary scrotums the sharpness was totally lost.
My personal experience - based opinion with this is that this knife is a total waste of my money. I havn't trown it away just to keep it as a reminder of never wasting my money in any other product from this company.

Have used this as a primary hunting knife for several years. It has never let me down. Its rubbery handle makes for a good grip, the blade stays sharp, and its compact and has a durable case.

This blade was a favorite for my brothers hide and seek game before he lost his life in the war... He would put it in soil foot or so down and gain pleasure from digging it up later only to see no rust NO RUST! After being. Buried for months... TOO COOL

Can't believe you can still get a knife made in the USA with 154cm steel at this price. I love mine!

The Gator 154cm has a beautiful lock back system where the knife goes through two clicks before opening and closing. The first click stops the spring from the knife opening or closing down on ones fingers the second click closes/opens the knife into a fixed position. The edge is hair shaving sharp and the textured grip handle stays nicely in the hand. Also, the lightness of the knife is impressive. I would recommend this knife from the serious outdoorsmen to the camper of for an EDC b/c it fits in the back pocket well.

I found an old pocket knife in a scrap car once day. After about a year of using it (it was really worn down but still very useful) I saw that a friend had a similar knife. We compared them, and it was indeed a gerber. I am guessing it was an older style. Suffice to say, I really did miss it when I lost it.
A little warning. If you tweak the blade enough, the joint will loosen up, and only the friction of the blade resting in the handle will keep it from opening. Near the end of its life, it just took a slight flick of the wrist; but that was no problem, since I enjoyed it being so loose.

THIS IS A GREAT KNIFE A little large for me to carry every day but I have three of them. SHOULD I SAY MORE