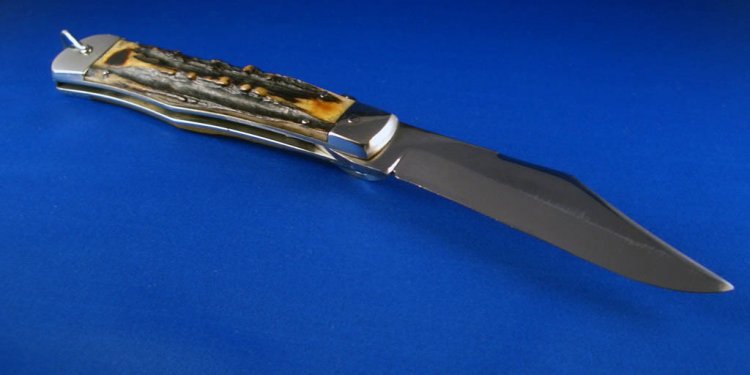 Locate the stamps at the base of the blade. (There may be one stamp on either side.) The stamps will be on the largest blade of a multiblade folding knife.

The stamp that includes the word "Case" is the tang stamp. Case has introduced 33 distinct tang stamps since 1905 for its folding knives, and 17 stamps on its fixed-blade knives. See References for a complete gallery, which will also help you to identify the years of manufacture.

Look for distinctive elements on the tang stamp: the word CaseXX; one or more dots; a series of dots and X's (for example.x.x.) surrounding the word "Case"; or lightning-shaped S's.

The XX refers to the company's proprietary two-step heating and two-step testing systems. In the company's early days (1914), this signified that the blade had been tested twice; an X was added for each test.

The .x.x. convention is a variation of its dot convention.

The lightning S's are simply a design element introduced in 1980.

Absence of those elements dates your blade as pre-1940.

Locate the pattern stamp, a number of four or more digits and/or letters. This will be on the largest blade of a multiblade knife. This number (for example, 5318) tells you much about the knife.

The second number signifies the number of blades. A pattern stamp of 5318 signifies a three-bladed knife.

The last two or more digits and letters (18 in our example) signify the model of knife, what Case calls the pattern. The number 18 signifies the junior stockman pattern, a three-bladed knife and one of Case's most popular.

The number at the end of the pattern stamp on a fixed blade knife usually signifies the blade length-thus, the numbers 65-5 signify a 5-inch bladed 65 pattern.

Locate a blade abbreviation-usually under the pattern stamp on the largest blade of a folding knife but sometimes on a smaller blade.

Case describes several dozen abbreviations for individual knife attributes and combines two or more of these in a blade abbreviation.

See References for a short list of these abbreviations.

Look for the Case distinctive "jigging patterns, " the texture that the company carves into its knife handles (see Resources). Case uses the bone of Brazilian zebu cattle, which is dense and durable, on many of its patterns. The jigging comes in such distinctive patterns as corn cob, pine bark, crow's feet and barn board. Most knife manufacturers introduce some jigging pattern into handles, but Case has the largest variety and a few proprietary jigging patterns.