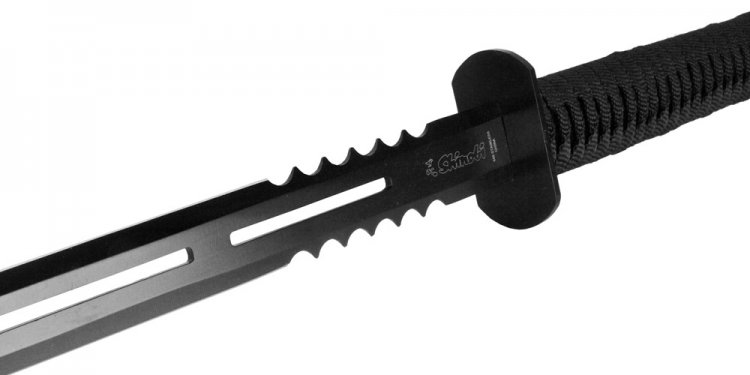 Yes, you know what I am talking about - not swords USED by zombies but used AGAINST the shambling, mindless, bloodthirsty horde ticking time-bomb we all know is just a question of time..

The whole 'zombie swords' phenomena began pretty much as soon as the first sword themed discussion boards came online. Many a thread would deteriorate into a tongue in cheek joke was made about how effective a given production sword would be, and how long it would last, if pitted against a charging, zombie horde...

Naturally enough, as we specialize in reviewing and discussing functional swords here on SBG, it could be argued that ANY of the swords we have previously reviewed and tested would make a mighty fine zombie slayer.

But some swords are perhaps better suited to the purpose than others.

And there is no doubt that the sword market in general has, in recent years, embraced promoting specialized zombie swords with a vengeance.

But the true zombie hunter knows that most of the so called zombie swords are for amateurs. Because the big secret is, the best blades for dealing with zombies are rarely labelled as "zombie swords" at all..

These days, most of the cheap so called 'zombie swords' can trace their heritage to early 'tactical Ninja' style blades, replacing one craze with another - but in most cases doing nothing but changing the color from black to biohazard green..

The problem is, these cheapies are usually quite useless..

These kind of swords are back, but now labelled under the zombie swords franchise

The majority of the overly fancy - zombie swords are less effective than a machete simply because they are all style and no substance. The blade geometry is wrong, they are made from fragile stainless steel and in truth - if ever there was a need for real zombie swords, these would have to be at the bottom of the list..

You see, the big secret is, the simple machete is actually the true zombie hunters weapon of choice - at least according to the who recommend it because it is utilitarian, multipurpose, more or less unbreakable and extremely low maintenance!

Not to mention, they are also EXTREMELY affordable, allowing even the most impoverished would be zombie survivalist to amass a small arsenal of highly effective zombie stoppers!

Due to the lack of a hand guard, Machetes should be handled with the utmost of care. Carelessness when using them can easily result in the loss of fingers or worse, so even though they are fun, you should treat them with respect.

Zombies aside for a moment (but only a moment, you just never know when they will rudely claw their way into a discussion) I should probably take a moment to mention that technically, a Machete is not technically a sword.

But the fun part is, the machete's we will be taking a look at are actually very affordable sword/machete hybrids - the best of breed machete swords that take it to a new level - tough bladed, tactical style blades that you would DEFINITELY want to include in your basic 'zombie bug out' kit.

OVERVIEW: When is a Katana not a Katana? When it is a Katana Machete! It's actually a pretty cool, tactical design - not so sharp or effective out of the box, but once sharpened rather frightening considering the cost..

OVERVIEW: These short blades are modern, updated tactical versions of two ancient, battle tested designs, bringing them screaming into the 21st century and able to bite DEEP into a wooden shield. Not that zombies use wooden shields. But if they started using them, at least this one can cut into them. Again, and again, and again..

'The Black Wind Katana'. This was the original Tactical 'Ninja' sword that set the standard, an oft copied design whose cheap knockoffs could not hold a candle to the real thing. A legendary blade and a BIG part of tactical sword history.

Of course, another type of sword that is especially useful against zombies is a good, modern made tactical sword - in other words a blade made from modern steel that uses contemporary fittings made from kraton, paracord, etc with a modern military feel.

Let's take a look at a real classic that was well ahead of it's time, the classic 'Bashee' by Hanwei.

OVERVIEW: This is a modern take on the ancient Burmese Dha, but more than that the Banshee may have been the first tactical sword ever and was actually way ahead of it's time. It can literally split bullets in half! But is that really amazing as it seems? A very interesting and very educational review by 'Shooter' Mike Harris.