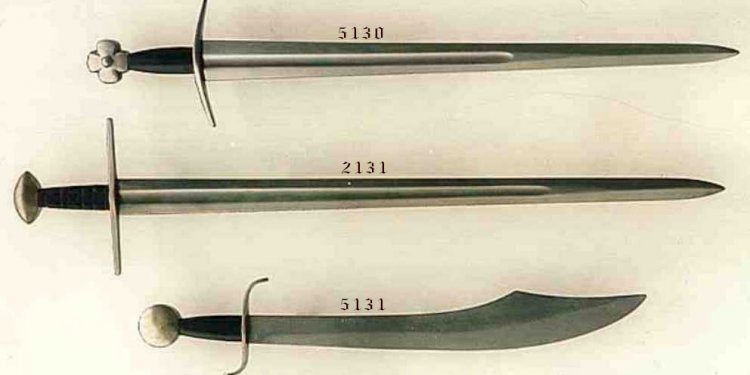 A sword is a bladed weapon, consisting in its most fundamental design of a blade and a handle. The blade is usually of some metal ground to at least one sharp edge and often has a pointed tip for thrusting. The handle, called the hilt, can be made of many materials, but the material most common is wood covered by leather, fish skin or metal wiring. The parts of a sword are remarkably consistent between cultures. The basic intent and physics of swordsmanship is fairly constant. This kind of weapon has been in use from the Bronze Age when the construction of long metal blades was possible for the first time. Early swords were made of solid bronze or copper; these were hard, but quite brittle. Not until iron could be forged did the sword truly become an important weapon. Soon, smiths learned that with a proper amount of coal (specifically the carbon in coal) in the iron, another metal (alloy really) could be produced: steel.

Several different ways of swordmaking existed in ancient times. One of the most reputed is pattern welding. Over time new methods were developed all over the world. In Pre-Columbian South America and Mesoamerica several cultures made use of types of swords without developing metallurgy; for example swords with obsidian "teeth" mounted along the "edges" of a wooden "blade".
Having seen use for about five millennia, swords began to lose their military uses in the late 18th century because of increasing availability and reliability of gunpowder weapons. Swords were still used although increasingly limited to officers and ceremonial uniforms. Cavalry sabre charges still occurred as late as World War II during which Japanese and Pacific Islanders also occasionally used swords.

Parts of the sword

There are hundreds of types of swords. Here are the most famous: