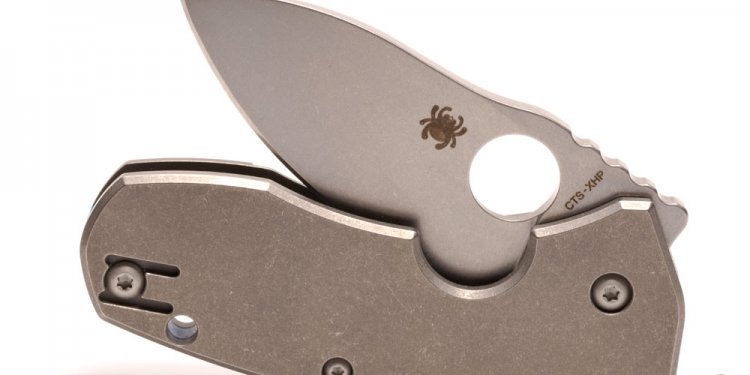 I purchased my very first tactical folder during my Freshman year of college in 1992. That knife was a Spyderco Edura. Since that time, I have always been a fan of Spyderco knives. They were pioneers in that they were the first to incorporate a pocket clip into a knife design, deeply influencing the concept of the modern tactical folder as we know it today.

is a custom knifemaker and tinkerer who is probably best known for his innovative method of converting a manual knife into an automatic. Butch and Spyderco teamed up a few years ago to offer a collaboration known as the . This was an excellent move on Spyderco’s part, because the result was amazing.

The C149G is a heavy-stock folder (6.2 ounces) with a thick 0.156” (4mm) modified tanto-style blade. The blade has a hollow grind on the cutting edge and a convex grind at the tip. This clamshell-shaped grind, known as a Hamaguri or Appleseed Grind, was very popular in designs by the late Bob Lum (the knifemaker who first introduced the modern tanto-style knife) and brings a distinct Japanese flare to the blade design.

The blade length of the C149G is 3.75 inches, and the length of the handle is 5 inches, resulting in a knife that is just under 9 inches in total length—8.687 inches to be exact. Based on those numbers, it may appear as though some length was lost somewhere—exactly .063 inches—but this is due to the angle of the handle near the ricasso.

The blade is made from Crucible Steel Company’s CPM S30V stainless, a proprietary powdered steel formulated specifically for cutlery. S30V is considered to be one of the best knife steels on the market. It is a very hard steel, so make sure you have a good diamond sharpener if you plan on touching up the edge. Of course, it will be a while before you need to re-sharpen it.

The C149G has a lightly contoured handle with black G10 handle scales. The highly-polished G10 scales have a beautiful, almost carbon-fiber look to them. The fitted stainless steel bolsters add a bold contrast to the black scales, resulting in a handle that has the aesthetic appeal of a custom folder.

There are four mounting options for the pocket clip. The knife can be configured to be carried in either a tip up or tip down configuration with the clip on either the right or left side. While this option makes the knife extremely versatile and customizable to the user, the mounting holes on the bolster do detract a bit from an otherwise flawless handle. The clip itself is stainless steel with a nicely polished black finish and the Spyderco logo laser engraved into the metal.

This Vallotton design pays homage to the Big Bear sub-hilt fighting knife designed by knife maker Bob Loveless. A comparison reveals that even the handle shape was heavily influence by the Big Bear. Since most of us here are knife nuts and like to concern ourselves with the minute details, I will go ahead and point out that, in the traditional sense of word, a folding knife does not actually have a hilt. A hilt actually refers to the entire handle of a sword or dagger. English is a derivative language, however, and knifemakers have historically modified the use of terms for lack of better descriptions, so I can see how calling this knife a “sub-hilt folder” is quite appropriate under the circumstances.