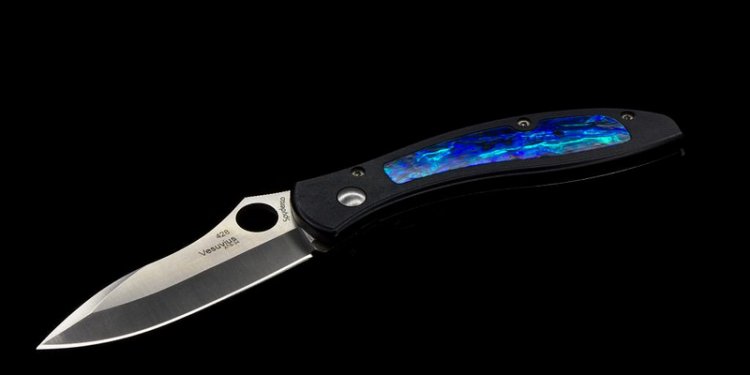 The late William F. "Bill" Moran (1925-2006) was one of the most famous of all custom knife makers and Spyderco is one of the world's best knife manufacturers, so a Bill Moran designed / Spyderco produced hunting knife is a match made in heaven at the relatively modest 2014 MSRP of $174.95. Bespoke knives made by Bill Moran are beyond the budget limit of most hunters and outdoorsmen, as they cost many hundreds or thousands of dollars and most are in the hands of collectors.

Bill Moran, a member of the Cutlery Hall of Fame, was the founder of the American Bladesmith's Society and past President of the Knifemakers' Guild. He made his first knife at the tender age of 12 and two years later was making knives for sale. By the 1950s, he was publishing a catalog of his knives. In 1960 he sold the family farm to become a full time custom knife maker.

Moran forged his knife blades with a hammer and anvil, in the manner of the old time blacksmiths from whom he learned the process. In the late 1960s, Moran pioneered the forging of Damascus steel, a lost art at the time. He developed the technique of pattern welding, which he used for his Damascus blades. After retiring from active knife making, Moran collaborated with Spyderco on the design of a couple of fixed blade hunting knives to be produced by Spyderco in Seki-City, Japan.

Spyderco produces two Moran fixed blade hunting knives, a drop point (#FB02) and an upswept trailing point (#FB01). The #FB02BB reviewed here is identical to the FB02, but with a non-reflective, black carbon nitride-instead of natural silver-blade finish. The shape of the actual cutting edge of these two Moran designs is nearly identical and typically Moran, with a long curve extending from the point rearward. The blades are slightly less than four inches long, 1/8 inch thick and made from premium VG-10 steel.

VG-10 (the G stands for "gold, " representing high quality) is a "super steel" made in Japan for cutlery. It was originally intended for Japanese chefs' knives, but was popularized for sports cutlery by Spyderco, who uses it in a number of their top quality knives. It is also used by Kershaw and Benchmade, among other notable knife manufacturers.

VG-10 is a high carbon stainless steel used in premium cutlery and machine made Damascus blades. As a blade steel, VG-10 is generally classed with such premium stainless steels as 154CM, 440C and CPM S30V in edge retention, overall performance and desirability. (Do not confuse VG-10 with VG-1.) CPM S30V steel would probably garner the most first place votes among knife aficionados, but virtually all experts consider VG10 a top quality cutlery steel.

Kudos to Spyderco for clearly stating the actual steel used in all of their knives, not just some phony trade name like "Trojan steel, " or a generic classification such as "stainless steel." (Any steel incorporating around 12%-or more-chromium in its composition is commonly deemed "stainless.")

The FB02BB blade is a general purpose, drop point, full-flat ground design. A full-flat grind, as used on the FB02BB, extends from the spine to the beveled cutting edge. The cutting edge is beveled at 20-degrees. This shape lightens the blade and reduces drag when cutting. I like flat ground blades, generally finding them easier to sharpen than hollow ground blades.

At 59-60 HRC this is a hard blade and, as with any good steel blade, it is wise to sharpen frequently during use, rather than let it get really dull. I had no problem touching it up with a hard Arkansas stone.

As with any fine hunting knife, do not attempt to sharpen a Spyderco/Moran with an electric kitchen knife sharpener; these are very bad for the blade. Learn to sharpen knives by hand, using medium and fine whet stones and crock sticks.

Like any new Spyderco knife, the FB02BB is very sharp out of the box. It will easily shave hair from my arm, slice curls from paper and cut-up cardboard boxes. It passes all the usual sharpness tests with ease. It is the middle of summer (August) as I write these words, but I am confident the Spyderco/Moran would make an exceptional hunting knife.

Spyderco offers a variety of sharpening stones and, for those unaccustomed to using a stone freehand, their Tri-Angle Sharpmaker sharpening tool. Visit their website at for details or see their informative master catalog.

Spyderco claims exceptional edge geometry for the FB02BB and considers it a superior design for game preparation and general outdoor use. I doubt that anyone who has experience using a classic Moran hunting knife in the field would disagree with this assessment.