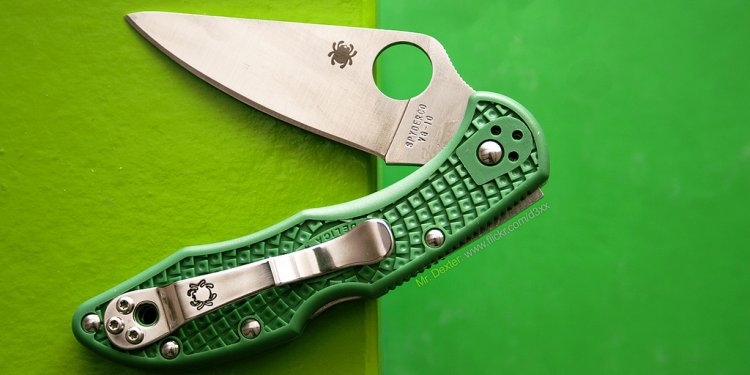 I’ve carried a plain edge Spyderco Delica as my EDC blade for the past 14 years and have come to completely trust and rely on it as my go-to knife. My original Delica was the very first iteration of that model (Delica Clipit) which came with an integral, nonadjustable, plastic pocket clip and basic waffle pattern FRN handle.

As basic as it was, it was my first truly easy to carry and easy to open pocket knife with the now famous, and widely imitated, large thumb deployment hole. As you can see in these photos, it’s seen a lot of use and has the scars to prove it.

Over the years Spyderco has made numerous design enhancements, material improvements, and style changes to the Delica model line-up including the new rust-proof H1 Salt series.

Some of the changes have been superb like the new volcano grip pattern and the metal pocket clip, but some, such as the G-10 scales and internal metal liners, have not particularly appealed to me because all it did was increase the weight.

I currently carry a plain edge Spyderco Delica 4 as my EDC, which has several improvements over my original Delica, such as: a configurable metal pocket clip that can be positioned for tip up or tip down carry on either side of the knife; adjustable screws that hold the case together; a slightly longer and better patterned handle; jimping along the back spine of the handle and knife to improve grip (see below); and a the David Boye dent on the lock release button that helps avoid accidentally unlocking the blade when it’s being held tightly.

Spyderco has just released their latest reincarnation of the Delica model with a new blade grind called a full flat grind or FFG.

All of the previous Delica knives came with a saber grind which wasn’t bad at all but meant that the blade was pretty thick. The new thinner and tapered FFG version completes the evolution of the Spyderco Delica and makes it what I would consider to be the perfect EDC knife for day to day small cutting tasks.

I had thought about creating a video or taking some photos of the different Delica models to explain the differences but as I don’t yet have an FFG model I decided to share the video that NutnFancy had already published, especially as he’s done a much better job of it than I ever could. Here’s NutnFancy’s video showing exactly why the new Delica 4 FFG version is such an outstanding EDC blade and even better than the original saber ground versions.

For reference, here is NutnFancy’s first video on the Spyderco Delica where he explains why it makes such a good EDC and how the model has evolved over the years – still a great video to watch and accurate.