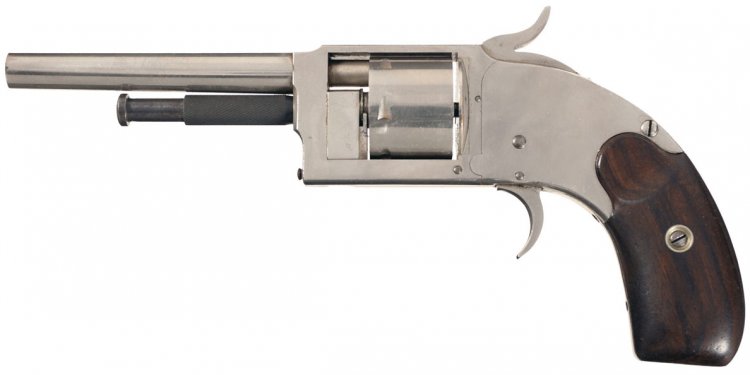 For nearly 150 years the word Winchester was synonymous with long guns. Yet it’s a little known fact Winchester Repeating Arms also toyed with the idea of introducing handguns. In 1884 Winchester and Colt met and decided each company should stick with manufacturing the firearms it was best associated with. That meant Colt would drop their Burgess designed lever gun and Winchester would not put their prototype sixguns into production.

Yet the agreement left Winchester free to make other types of handguns. Of course at that time in history the only other handgun mode of operation was single shot. By the early 1900’s someone at Winchester decided there was a market for just such a handgun, single shot, bolt action in operation and in .22 Short and Long chambering.

Worthy of note here is firearms designing genius John M. Browning had left Winchester in the 1890’s in a dispute over their recalcitrance about moving into more modern firearms designs. By the time someone at Winchester decided a single shot .22 was a good idea, Browning, in collaboration with Colt Patent Firearms, was producing semi-auto Colt Pocket Pistols in .32 Auto.

The action of one of the three Winchester .22 pistols shows its Model 1902 .22 bolt-action rifle heritage.

For well over 50 years I’ve been unaware of Winchester’s bolt-action .22 handguns until a friend dropped by last week. He was packing along three of them obtained after their collecting owner passed away and the inheriting family desired to be rid of them.

All of these single-shot Winchester pistols were based on the company’s Model 1902 .22 bolt-action rifle. However, they differed greatly in details. Two had cast bronze grip frames with nickel-plated finish. The third has a lightweight steel grip frame and all had walnut grips.

Interestingly all three grip frames were of different configurations. To me one frame felt most like a semi-auto’s. It was rectangular. The second one’s grip was a bit akin to the odd-shaped grip frame of a Colt Single Action Bisley. And the third had a sort of saw-handle grip frame as those .44 revolvers bought by the Imperial Russian Government from Smith & Wesson in the 1870’s.

Likewise each Winchester .22 pistol had different barrel shapes. Each grip frame at top was semi-circular so a round barrel would bolt right into it. A large thumbscrew directly in front of the trigger guard secured barrel to grip frame. With one pistol, as soon as its 10″ barrel cleared the grip frame it was cut into an octagon configuration. For a front sight it had a silver bead type dovetailed to the barrel.

Rear sight was open and likewise dovetailed into the barrel. It was made of spring steel so a screw could give it a minor amount of elevation adjustment. The second one had about an 8″ heavy round barrel with sights essentially similar to the first mentioned one.

The third one — and the one seeming most practical to me — had about a 7″ round barrel stepping down from the part bolted to the grip frame in a rapid taper. I can best describe it as similar to the barrel on the Ruger Mark I Target Pistol I owned in the 1960’s. Its sights were a fixed, dovetailed blade front with a fixed, open rear, also dovetailed to the barrel.

The current owner of these Winchester .22 pistols stopped by on his way to the Winchester Museum in Cody, Wyo., so the curator there could examine them. He offered for me to shoot them but I had to decline due to not having any .22 Short or .22 Long ammunition on hand.