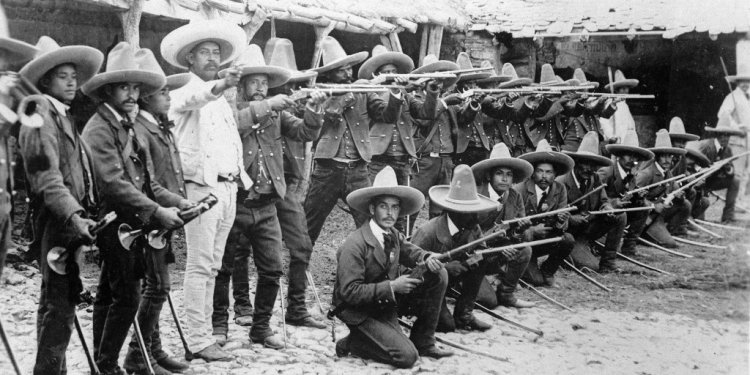 The U.S. Army’s upgraded M4A1 combat rifle is just the latest development in a category of weapons that American soldiers have carried since the country’s earliest days.

Even before there was actually a "United States" there was what could arguably be considered the first true "American rifle." Known as the Pennsylvania rifle, the Kentucky rifle or simply the long rifle, it was designed for hunting and was characterized by an unusually long barrel, a unique development that was uncommon in the European rifles of the era.

Military history consultant and former United States Marine Corps Captain Dale Dye told FoxNews.com that, in the flintlock era, the long gun was the first to have grooves in the barrel. "These grooves, or rifling, along with the longer barrel, made the guns much more accurate than the British Brown Bess musket, " he said.

The long rifle wasn't ever produced in large enough numbers to truly make a difference during the American Revolution, but its use by sharpshooters – such as members of Morgan's Riflemen at the 1777 Battle of Saratoga established the reputation of the American marksman.

The first truly big leap forward in long gun design came with the Caliber .54, Model 1841 Rifle, which was the first to utilize a percussion ignition system. The Model 1841 is sometimes called the Mississippi Rifle due to its use by a Mississippi rifle regiment during the Mexican War between 1846 and 1848. The regiment was commanded by future Confederate States President Jefferson Davis.

Davis, who served as Secretary of War under President Franklin Pierce, also authorized the production of the .58 Caliber Musket, or Springfield Model 1861, the first rifled weapon to be produced for general issue by the U.S. Army. The Springfield Model 1861 would go on to be the most widely used U.S Army weapon during the Civil War.

The rest of the 19th century saw other innovations in rifle design including the Springfield Model 1873 "Trapdoor", a single shot weapon that was not without its problems, and later the Model 1896 Krag-Jorgensen, a reliable but underwhelming bolt action rifle.

The real change came with the Springfield Model 1903 – an American take on a European classic.

"The Springfield was patterned after the (German-made) Mauser action, " said Dye. "It didn't have an overly deep magazine, but it was accurate to 800 yards and could be fitted with a scope and used as a sniper version."

The Springfield M1903 was the standard infantry rifle for all branches of the military during World War I, and was used widely during the early phases of World War II. It was replaced by what has been called one of the finest weapons of the 20th century, the M1 Garand, named after its inventor John Garand.

"This was the first successful semi-automatic used by any military, " Dye told FoxNews.com. "It is extremely rugged, extremely accurate."

The M1 Garand, which will celebrate its 80th anniversary next year, was a significant improvement over the bolt action rifles of the day, which required that the weapon was manually cocked between each shot.

"This was really a game changer as it was semi-automatic and held eight rounds, " R. Lee Ermey, better known as the "Gunny", former United States Marine Corps staff sergeant and host of the Outdoor Channel's “Gunny Time” told FoxNews.com. "It could be argued it helped win World War II."

After the war the military planners sought to find a one-size fits all rifle, and the result was the M14, which was actually developed to replace four different weapons systems that included the M1 rifle, the M1 Carbine, the M3 "Grease Gun" submachine gun, and the M1918 Browning Automatic Bar (BAR). The upsized M1 had its fans, including the Marine Corps, which still issued one to each platoon in the Vietnam War.

"The M14 could hold its own against the bad guy gun, the AK-47, " added Ermey. "The problem is that it went with a smaller round than the M1, so it lost some of its punch."

"It was a little too late for the changing tactics of the conflict, " said Dye. "The select fire didn't work out as well as planned. It had too heavy a cartridge for close-quarter fighting, and it made for a heavy weapon. While you are willing to trade weight for firepower, the rifle was not ideal for the situation in Vietnam."

The irony is that the weapon that replaced the M14 proved not to be ideal at first either. The M16 had a rough baptism of fire, largely due to the fact that it was erroneously billed as self-cleaning and issued without cleaning kits.

"It had a turbulent introductory period, " said Dye. "The problem for the M16 is that it was introduced while fighting was going on, and this didn't allow for the familiarization period that small arms really need. As a result it cost lives, and that is what you don't ever want to do."

The other problem with the M16 was the fact that military planners switched the ammunition to one that produced more fouling, and this resulted in jams. The rifle, however, was refined with the M16A1 version.

"The Americans don't have a good track record of backing up, " Dye told FoxNews.com. "With the M16 this meant improving it and it proved to be a reliable weapon."

As the battlefield changed, the military adapted as well with the introduction of the M4 Carbine, a shorter and lighter variant of the M16A2. This has replaced the M16 in most U.S. Army and Marine Corps combat units as the primary infantry weapon today.