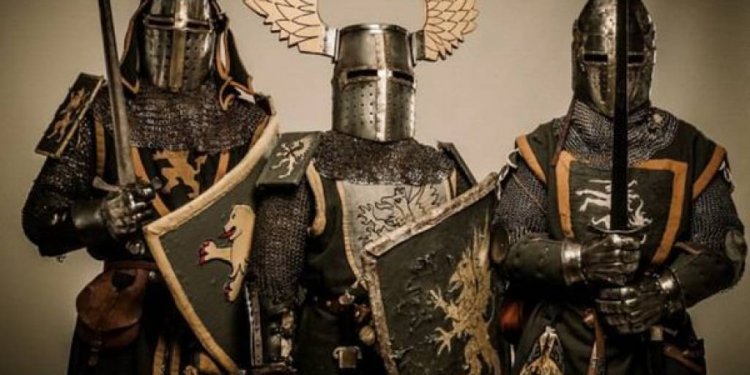 
The Medieval period of history was extremely violent. The quest for wealth and power was driven by the violent society of the European countries. Massive stone castles were built to act as power bases. Lands were subject to invasion leading to wars, battles and siege situations. This was the period of the Norman conquest and the battle of Hastings in England. Warfare, siege warfare and weapons strategy and tactics where subject to change due to new weapons ideas and changes in Medieval technology and architecture. The fighting in Europe had a brief respite when the attentions of the Medieval warlords turned their attention to the Holy Land when the Medieval Weapons were used by the religious knights who fought in the Crusades. Facts and interesting information about Medieval weapons used in this turbulent era including the xxxx are detailed and described in the articles below - just click a link for history, facts and information. Additional articles on the history of Medieval weapons and weaponry relating to siege weapons and warfare are also detailed.

Medieval Siege Weapons
The style of warfare during the times was fought around the power bases which were the great Medieval castles. This Medieval weapons and the siege style of warfare changed with new technology and different weapons. The massive and deadly siege weapons included a variety of siege weapons and siege engines such as catapults, the ballista, battering ram, mangonel, siege tower and the trebuchet. Siege weapons were made to order! Facts, history and interesting information about Medieval Siege weapons used in times are described in the articles below - just click a link for interesting history, facts and information.

The most famous Medieval Siege Weapons used during the era included the Ballista, Catapults, Siege tower, the Mangonel, the Battering ram and the Trebuchet.

Weapons Training
Training in the use of the lance was practised at the Quintain and included tilting and "Running at the Rings". Training in the use of swords and other close combat weapons were practised at the Pell. Knights weapons training even extended into a game - Pell Mell! Facts and information about each of this training are described via the links detailed below:

Medieval Weapons - Knights and Soldiers
There were basically two types of armed men during the Medieval era who used different weapons according to the rank and status - the Knights and the foot soldiers, or men-at-arms, who included the Archers. The men-at-arms held weapons according to their status and position which was determined by the Feudal system. The weapons, weaponry, armor and horse of the Knight were extremely expensive and therefore out of the reach of peasants. The weapons used by peasants were therefore often adapted from farming tools. Lords and nobles were expected to provide soldiers who were trained in a variety of Weapons. Knights were supported by their soldiers and the Medieval Weapons used by the lower classes included the Polearm, Battle Axe, Mace, Billhook, Caltrop, Flail, Halberd, Longbow, Bow and Arrow, Crossbow, Pike, Poleaxe, Quarterstaff, Spear and the War hammer. The Knights themselves used different Weapons riding on their warhorses - every knight had spent their whole lives gaining expertise in the use of the lance, swords and daggers and all the other weapons which were suited to his status.

Weapons and the influence of the Feudal System
The increasing number and variety of Medieval Weapons was partly due to the requirements of the Feudal System. Life lived under the Feudal System demanded that everyone owed allegiance to the King and their immediate superior, such as the lords, nobles and knights of the realm. Everyone was expected to pay for the land by providing the following services:

Skill in the use of the weapons was necessary and a played a vital part in Medieval life. Every man was expected to be able to use a weapon. When war erupted troops were raised by the Feudal Levy when there was a 'Call to Arms'. Under the Feudal Levy men were required to fight for a limited period of 40 days - under certain circumstances this could be increased to 90 days.

Groups of Medieval Weapons
The groups of weapons, or weaponry, used in the times fell into three categories:

Weapons were designed to cut, slice, chop, hurl, smash and bludgeon - life during the era was extremely violent.

Medieval Weapons
The Medieval Life and Times website provides interesting facts, history and information about the weapons, armor and battles in Medieval history which scatter the history books. The Life and Times Sitemap provides full details of all of the information and facts about the fascinating subject of the lives of the soldiers and knights who lived during the historical period of the Middle Ages. The content of this section on Weapons provides free educational details, facts and information for weaponry reference and research for schools, colleges and homework for history courses and history coursework.