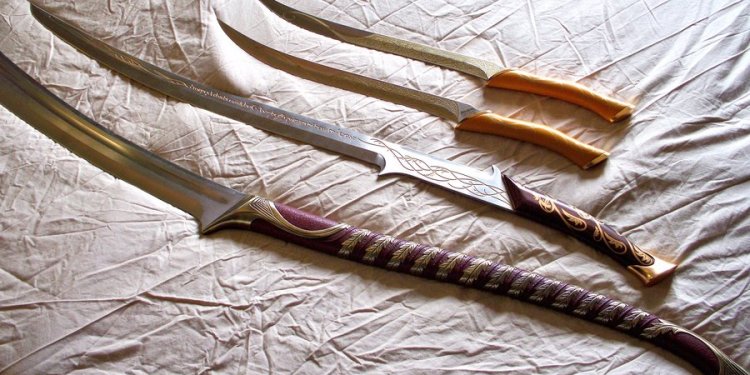 In The Lord of The Rings Gollum seems to have an affinity (or rather a hatred of) elvish workmanship.

He is in physical pain from the elvish rope.

‘It hurts us, it hurts us, ’ hissed Gollum. ‘It freezes, it bites! Elves twisted it, curse them! Nasty cruel hobbits! That’s why we tries to escape, of course it is, precious. We guessed they were cruel hobbits. They visits Elves, fierce Elves with bright eyes. Take it off us! It hurts us.’ Lord of The Rings | The Taming of Sméagol

And he cannot stomach the elvish waybread

Frodo broke off a portion of a wafer and handed it to him on its leaf-wrapping. Gollum sniffed at the leaf and his face changed: a spasm of disgust came over it, and a hint of his old malice. ‘Sméagol smells it!’ he said. ‘Leaves out of the Elf-country, gah! They stinks. He climbed in those trees, and he couldn’t wash the smell off his hands, my nice hands.’ Dropping the leaf, he took a corner of the lembas and nibbled it. He spat, and a fit of coughing shook him. ‘Ach! No!’ he spluttered. ‘You try to choke poor Sméagol. Dust and ashes, he can’t eat that. He must starve. But Sméagol doesn’t mind. Nice hobbits! Sméagol has promised. He will starve. He can’t eat hobbits’ food. He will starve. Poor thin Sméagol!’ Lord of The Rings | The Passage of the Marshes

We know that Sméagol's family told tales of ancient history, in one case he talks about the towers built for the siege of Mordor.

‘The old fortress, very old, very horrible now. We used to hear tales from the South, when Sméagol was young, long ago. O yes, we used to tell lots of tales in the evening, sitting by the banks of the Great River, in the willow-lands, when the River was younger too, gollum, gollum .’ He began to weep and mutter. The hobbits waited patiently. ‘Tales out of the South, ’ Gollum went on again, ‘about the tall Men with the shining eyes, and their houses like hills of stone, and the silver crown of their King and his White Tree: wonderful tales. They built very tall towers, and one they raised was silver-white, and in it there was a stone like the Moon, and round it were great white walls. O yes, there were many tales about the Tower of the Moon.’ Lord of The Rings | The Black Gate is Closed