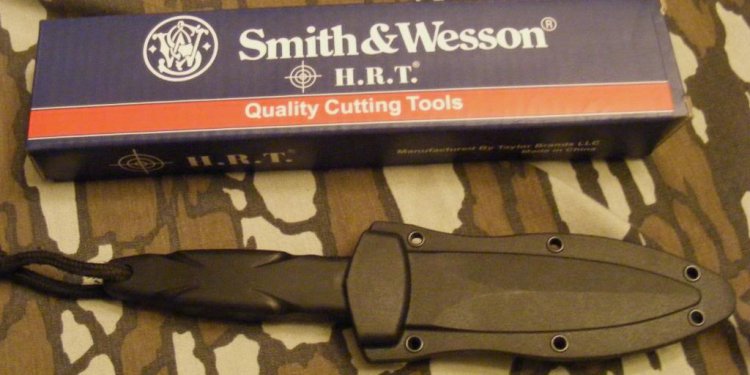 The is one mean SOB. I’ve been wanting to review this knife for a while now, and now that I’ve carried it I can finally do a review.

This knife has a large 4.4″ blade of 440C stainless steel and an overall length of 10″. Combine the big blade with a heavy glass breaker and solid steel liners and this knife sits right around 9 ounces. No doubt, it’s a heavy knife for heavy duty tasks. Don’t let the weight fool you, the deployment on this blade is fast, very fast. It has teflon washers that help flick out the blade with authority. The sound of the deployment alone is quite impressive. Its got a nice “crack” sound to it, faintly reminiscent of cambering a round in my S&W 1012.

This is a tanto blade with a saber grind. It’s coated in black teflon and has a couple reliefs / blood grooves cut into it. A tanto blade is great for piercing and thrust movements because of the heavily reinforced tip. This knife is designed for heavy, tactical use and the “border control” designation triggers in my mind visions of heavy duty tactical situations against Mexican drug lords; extreme defensive counters, slicing open large packages of black tar heroin, and conducting complicated field surgeries in addition to more mundane EDC tasks around the office like opening dossiers and spreading extra butter on your Texas toast – your mileage may vary.

The handle is made of 2 slabs of machined aircraft aluminum. It’s textured for grip and feels good in the hand. It’s anodized a jet black and has a deep glossy finish. Inside is a blackened steel liner lock that holds the blade very securely. The knife is a pillar construction, which I prefer because it makes it easy to clean.

The pocket clip is held in place by 3 allen screws and allows for right handed tip up carry only. Tip up carry is good for these knives but I would have preferred to see an ambidextrous option.

The glass breaker is a big chunk of steel in the back of the handle. I think this knife would work very well in this capacity although I haven’t had a chance to break any glass yet. As I said before, the knife is heavy so you will have a lot of weight coming down on that point. Also, there is a seat belt / cord cutter. This is handy and helps give the knife it’s rescue designation. The blade on this is like a razor and easily slices through clothing and cord.

The Border Guard is a fairly ridiculous knife, but given the price point, I wouldn’t completely dismiss it. With aluminum handles and a 440C blade, this is an inexpensive beater blade, and is not something I would recommend to true knife enthusiasts. Fans of the Smith and Wesson brand may also be disappointed to learn that this knife is made in China, and S&W sold the right to use the Smith and Wesson name to Taylor Brands. So this is not actually made by Smith and Wesson.

Are Smith and Wesson Knives good