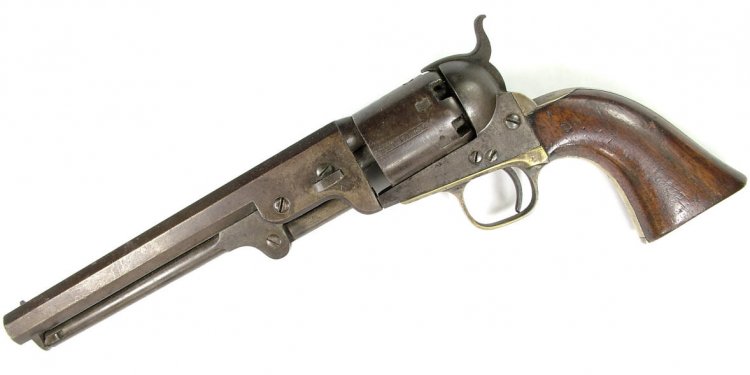 Samuel Colt was born in Hartford, Connecticut on July 19, 1814. He showed an early fascination with science, and during his youth, Colt studied both chemistry and mechanics. While still a boy, he attempted to produce a pistol that was capable of firing multiple shots without reloading, but his efforts were unsuccessful.

In 1830-31, while the sixteen year-old Colt was serving as a seaman aboard the brig Corvo, he observed the ship's wheel and the relationship of the various spokes to the center hub. This inspired him to make a wooden model of a revolving pistol. Although others had already experimented with revolvers, Colt's design was the first to automatically rotate the cylinder when the gun was cocked. After his return to the United States, he showed his model to his father, Christopher, and to Henry L. Ellsworth, a friend of the elder Colt who was then serving as Commissioner at the U.S. Patent Office in Washington. Both men encouraged Samuel to continue with his work and to seek a patent for his design.

At this point in his life, Colt had an idea but no money with which to proceed on his new career path. For the next four years, he worked the traveling show circuit as "Dr. Coult of Calcutta." His lectures and demonstration of nitrous oxide to crowds in the U.S. and Canada provided a source of capital, which was forwarded to gunsmiths who produced working versions of his firearms designs. In addition to the money he received, this period in his life also provided Colt with valuable experience in public speaking, marketing, and public relations.

At age 20, Colt gave up touring and, with borrowed money, traveled to Europe to secure English and French patents for his revolving pistol. Upon his return to the United States in 1836, he also received a U.S. patent. In March, 1836, Colt formed the Patent Arms Company and began operation in an unused silk mill along the banks of the Passaic River in Paterson, New Jersey. His first product was a ring-lever revolving rifle, available in .34.36.38.40, and .44 caliber, in which a ring located forward of the trigger served to cock the hammer and advance the cylinder for each shot.

This was soon followed with a revolving pistol. These five-shot "Paterson" revolvers featured folding triggers, and were available both with and without loading levers in .28.31, and .36 caliber. Patent Arms also produced smoothbore revolving carbines and shotguns. The outbreak of war between the U.S. government and the Seminole tribe provided Colt with his first break. Seminole warriors had learned that soldiers were vulnerable while reloading their single-shot firearms, and they developed a tactic of drawing fire, then rushing the temporarily defenseless soldiers and wiping them out before they could fire a second volley. Colt's revolving rifles were quite effective against this, and the Army purchased his products for use by troops in the Florida campaign.

Unfortunately for the young inventor and businessman, the Patent Arms Company went bankrupt and ceased operation in 1842. The company's assets were sold at auction, and Colt turned his attention to other areas, including the use of electric current from galvanic batteries to detonate underwater explosive mines. The U.S. government was sufficiently interested in this idea that Colt received funding to continue his work for possible use in harbor defense.

During this period, Colt met Captain Sam Walker of the Texas Rangers. Walker and his fellow Rangers had experience with Colt's Paterson revolvers, and one Paterson-armed troop of 15 men under the command of Jack Hays had successfully charged and defeated 80 Comanches, then considered to be the finest light cavalry in the world. Walker believed that an improved version of the earlier revolver would be an asset on the frontier. The two men designed a massive 4 pound, 9-ounce .44 caliber six-shot revolver, and the government ordered 1, 000 of them for issue to mounted troops. Since Colt no longer had a manufacturing facility, he contracted with Eli Whitney of Whitneyville, Connecticut, to produce these guns.

This order was completed in 1847, and Colt once again devoted himself to firearms production. He established a new factory in Hartford during that same year, and began production of a smaller, lighter .44 caliber revolver. These so-called "transitional Walkers" were followed by the First, Second, and Third Model Dragoon revolvers, as well by as the Baby Dragoon, the Model 1849 Pocket Revolver, and the Model 1851 Navy Revolver. Many of these guns saw service through the Civil War and beyond. The discovery of gold in California stimulated the demand for firearms, and Colt also received orders from Russia and Turkey during the Crimean War. He expanded his operations to England, operating a manufacturing plant in London between 1853 and 1857. By this time, Colt operated the world's largest private armory, and he had introduced standardized production, division of labor, and assembly-line mass-production methods to his factory.

In 1855, Colt introduced a spur trigger revolver that featured a fully-enclosed cylinder. These sidehammer, or "Root" revolvers, were named for Elisha K. Root, a noted inventor and holder of the sidehammer patent, who at that time was employed as Colt's factory superintendent and Chief Engineer. Colt also produced the sidehammer Model 1855 rifles and carbines for military and sporting use, as well as a revolving shotgun. In failing health, Colt expanded his factory on the eve of the Civil War, and began production of a new, lightweight .44 caliber Army revolver, followed a year later by a .36 caliber Navy version.