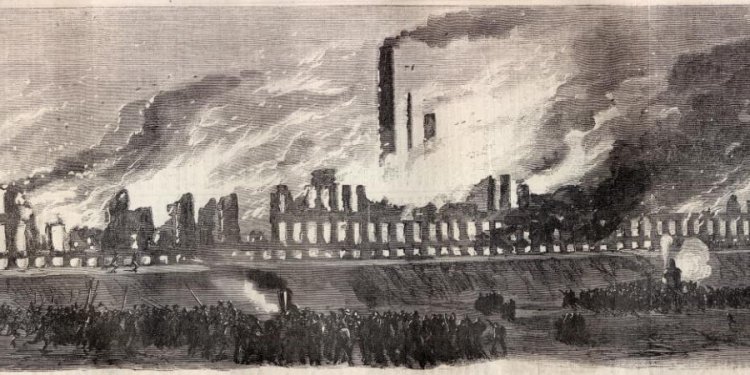 As you probably recall from History 101, a primary source is a document, report, or set of observations written contemporaneous with the period you’re studying. The best primary sources are first-person accounts—these reports from the past give historians our best evidence of what things were really like in a given place and time.

Recently, while researching Hartford’s industrial history for our exhibition, I uncovered a remarkable first person account of the inner working of Samuel Colt’s Hartford Armory from 1857. The observations of the unnamed reporter and (pre-photographic!) renderings by artist Nathaniel Orr provide a rich sense of life in Coltsville and on the factory floor.

Fortunately, copyright protection has expired on such an old piece, so I thought it would be fun to reprint it here. The original article is quite long so I have cut and provided a digest of certain sections, while retaining the descriptions of the factory and grounds. Enjoy!

Eric’s note: The first part of the article describes Colt’s invention and patenting of the revolver in 1836. It then describes Colt’s first failed efforts to build a successful business in Paterson, NJ. In 1847, after correcting some of the defects in his original design, Colt received an order for 1000 revolvers from Captain Samuel Walker of the Texas Rangers. Colt contracted with Eli Whitney, Jr. of Hamden, CT, to manufacture the revolvers to his specifications. The proceeds from this and subsequent orders allowed Colt to establish a temporary factory in his native Hartford, then build his permanent factory in 1855. The observer from United States Magazine

[The orders from Colt’s improved revolver enabled him to] …transfer his enterprise to Hartford, his own native town, upon the banks of the Connecticut, where he has at last succeeded in founding an armory, the most magnificent of its kind, it may be safely alleged, in the known world—an establishment, built in the first place by damming out—in a project deemed by many, in its inception, almost superhuman—the waters of the mighty Connecticut in their maddened freshet time—which incorporates, in buildings and machinery, a full million of dollars—which give employment to from six to eight hundred men inside the main building, and to numerous hands outside, —which dispenses daily, in wages alone from one thousand to fifteen hundred dollars, and manufactures, year by year, from seventy-five to one hundred thousand arms…

…Within the corporate limits of the City of Hartford, immediately below the Little or Mill River, is a section land, containing about 250 acres, which, owing to its formerly being submerged at the periodical freshets of the Connecticut River, was available at certain seasons only, and then but for grazing. Colonel Colt selected and purchased this spot as his field of operations. His first move was to erect an embankment, or dyke, by which the waters of the Connecticut were entirely and permanently excluded; thus reclaiming the land for building purposes or tillage, as might be desired. This embankment is about two miles long, averaging over one hundred feet wide at the base, and over forty feet in width at the top, and from ten to twenty feet in height. It is built in the most substantial manner, the sides being covered with osier, both for protection and ornament, and for material for his willow works factory, for which he has brought fifty skilled craftsmen from Germany and plans to build for them Swiss-chalet style houses called the Potsdam village. From the smoothness of the road on the dyke, and the beautiful scenery in the vicinity, the dyke has become the fashionable drive of the citizens.

That the operations might be on the most extended scale, and also that the proprietor might have the undivided exertions of his principal assistants in the manufacture, an association was now formed under a special law from the state, styled “Colt’s Patent Fire-arms Manufacturing Company.” The stockholders in the company are few, Colonel Colt being largely the principal, and the others the heads of the various departments of the business. The capital is $1, 250, 000; the whole of which is invested in the buildings, tools, machinery, raw materials, etc….The new armory…was finished and operations commenced in it in the Fall of 1855.

The motive power is located about in the center of the main building. It consists of a steam engine—cylinder, 36 inches in diameter, 7 foot stroke, fly-wheel 30 feet in diameter, weighing 7 tons. This engine, which is rated at 250 horse power, is supplied with the well-known “Sickel’s Cutoff, ” which the superintendent and engineer speak of as the most useful and important addition to the steam-engine since the days of Watt. The steam is furnished from two cylindrical boilers, each 22 feet long and 7 feet in diameter. The power is carried to the attic by a belt working on the fly-wheel; this belt is 118 feet long by 22 inches wide, and travels at the rate of 2, 500 feet per minute.

Fully appreciating the great interest manifested by our readers in descriptions of this kind, we will now proceed to conduct them through the interior of this immense industrial pile, and on the way we will endeavor to explain, as understandingly as possible, the various processes of the manufacture, from the raw metal and wood, to the complete and effective arms familiarly known as Colt’s Revolvers.