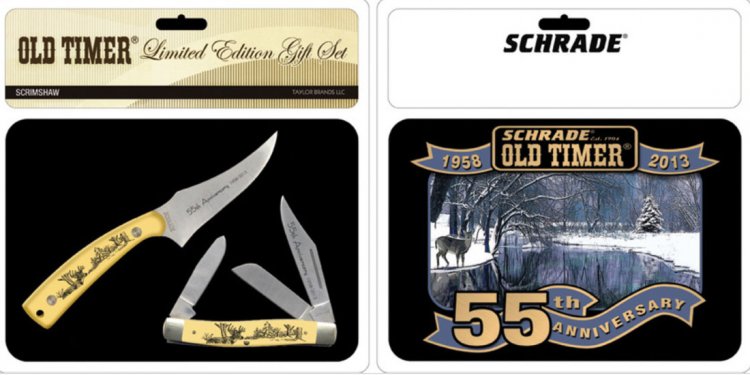 The roots of the Schrade Cutlery Company precede its founding in 1904. True, that was the year brothers George, William, and Louis Schrade set up shop in Walden, New York, but George had been a student of mechanical objects since the mid-1880s, when he spent 10 years in New York City producing the working models inventors were obliged to submit to the U.S. Patent Office with their creations. In his spare time, Schrade invented a few of devices of own, his most infamous being the switchblade.

At the time, the switchblade did not have the negative connotation it does today—that bad-boy reputation would not stain the knife until the 1950s, when the switchblade was depicted in film and fiction as the weapon of choice for hoodlums and pimps (the knife was banned in the U.S. in 1958, and still remains illegal in many states). Instead, this spring-loaded blade, which would flip open automatically when a button was depressed on the knife’s handle or bolster (the part of the knife that describes the transition from blade to handle) was pitched to consumers as a safety and convenience feature. “Being easily operated with one hand it is far more convenient than the old style pocket knife which necessitates the use of both hands to open and frequently results in broken finger nails, ” read one Schrade product description from the early 20th century.

In fact, George Schrade’s first cutlery company, founded in 1893, was called the Press Button Knife Company precisely because it specialized in switchblades. After selling his 1892 patent for this knife to Walden Knife Company in 1903, Schrade moved from New York City to Walden in 1904, when he set up Schrade Cutlery Company with his brothers. By 1906, Schrade had improved upon his switchblade by giving it a locking device, and while his brothers managed the business side of the company, George made machines designed to increase his company’s manufacturing quality and efficiency.

One machine, which cut the shape of a knife-maker’s shield into the outside of a knife’s handle, was used in 1911 by Thomas Turner and Company of Sheffield, England, a historic center of knife-making. The machine, installed by Schrade himself, increased Turner’s production, but the company’s workers protested this intrusion of automation, leading to a strike that forced the machine’s removal.

From England, Schrade and his son journeyed to another knife center, Solingen, Germany, where they produced a switchblade called the Sprenger. The Schrades worked in Germany until World War I, when the German government confiscated their shop’s equipment, which brought them back to the United States, where Schrade introduced numerous improvements to his push-button knife, and gave them names like Flylock and Presto.

Still, switchblades were not Schrade’s only products. The company also made pocket knives for the Boy Scouts and the Navy. One of its most popular knife models continues to be the Old Timer, some of which were sold as fat-handled Barlow knives, while other came in slim Senator designs. As for the handles of these jack knives, they ranged from bone and ebony to mother-of-pearl and celluloid.

A tool collectors’ dream, this site is a deep repository of photos and info on 20th century hand tools and the co… [read review or visit site]

This elegant tribute to turn-of-the-century bicycling includes memorabilia, photographs, and an index of 3140 bicyc… [read review or visit site]