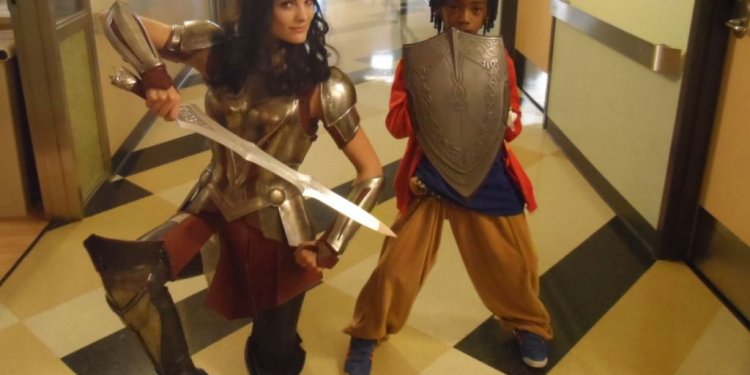 I had this steel breastplate on and I was holding a huge pike when I learnt a cool fact about swords. This actually happened by the way. I learnt that not all the edges of a sword were sharpened for slicing. I was like... what? But in the films and stories and games they slice people up like meat in a butcher's shop. But the historian chap was like... no. The edges are blunt and the sword is heavy so that people can try and break the bones of their opponent underneath the armour, or at least severely bruise them, and immobilise them. It's just the tip that's razor sharp for the plunging stab that kills them. Oh and that groove down the middle of the sword: that's there to let the air into the wound so you can pull the sword back out.

It's horrid isn't it? But that's what weapons were for: killing. They were designed to be as effective at their task as possible. Do you know what those hooks were for on those long halberd weapons? Well, you know where the weak point is on suits of armour don't you? Back of the legs - crotch specifically. Simply thrust through the legs and pull up and back. Job's done.

It fascinates me, the whole science of creating armour to counter weapons, and then weapons to overcome that armour, and so on and so on until boring guns.

Not all swords had blunt edges of course, but my example was a very long-winded way of saying that most games or even TV shows and films don't realistically portray what would actually happen in a sword fight with an armoured opponent. In The Witcher 3 you can cleave armoured opponents diagonally in half, but nope, wouldn't happen in real life - not even with a brute like Geralt wielding the blade. And that's what this Kingdom Come: Deliverance video is all about - that and slicing up meat like a butcher. See, the intro does make sense!

Just like the Kingdom Come: Deliverance video where we learned about layering armour - why does he kick him, by the way? - today we're learning another history lesson about how weapons affect armour. As ever, Czech developer Warhorse goes a bit overboard, and it makes for bizarrely entertaining viewing.

"You can see that the armour is pretty damn powerful, " Warhorse leader Dan Vavra explains in the video, "and full plate armour makes you a medieval tank basically.

"As you can see it's very different to how people think, and it works exactly the same way in our game. We have three types of damage, four layers of armour, and more than 30 damage zones on every character in the game, so it really matters where, how and by what you hit your enemy."

Do please note, before you watch, that a pig's carcass is hacked to pieces in the video. It's not particularly disturbing, and I say that as a flower-wearing vegetarian, but I realise it may offend.

The weird world of 80s computer books Learning BASIC in the shadow of the bomb.

This is footage from the ongoing beta that I captured earlier this year.

Kingdom Come: Deliverance is the no-fantasy medieval role-playing game steeped in history and realism. There's fantasy in the sense that you'll rise from zero to hero over the course of a story, but no magic and dragons and all that nonsense (that I love actually). It's a PC and console game, and it's coming out in 2017.