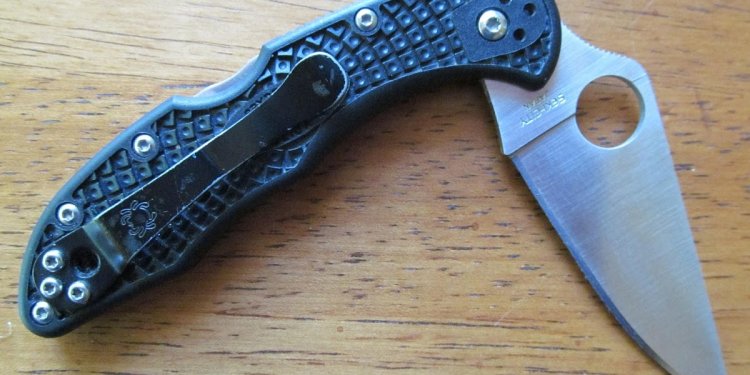 Wow. My new precious. That was my initial impression. And then, a little sadness knowing that my trusty Dragonfly would never see the same use. The Delica 4 is pretty much my perfect EDC as far as size, weight, design and functionality. It's just a slightly larger Dragonfly, elongated just a little. The first thing I noticed, was that I felt it in my pocket, where I never did feel the Dragonfly or Ladybug.

The Delica has a reputation for build quality and my review sample doesn't disappoint. The FRN handles are a little rough around the edges, but the handles themselves are solid and so is the rest of knife, including the clip. The knife is put together with all Torx T7 screws, which are all the same size execpt for the pivot screw, which is a Torx T8.The back lock is well constructed, and the handle is rigid enough to where most people probably wouldn't notice that it doesn't have a liner. The FRN material is light and strong, and lately I've preferred it over G10 because it's so light, and I really like the grippy texture of the handle.

The blade on the Delica is well constructed. The Japanese know steel, and Spyderco really knows how to make a flat ground blade. This isn't a $300 shelf queen, so the blade you are getting is more of a workhorse. There are phosphor bronze washers located on either side of the pivot screw.

The screws look a little cheap, but I was able to get a firm grip on all the T7 screws as well as the T8 pivot screw with my good quality screwdrivers. I don't generally take apart my knives, but I reserve the right to.

The fit and finish on my sample is good overall. Out of the box, the texture material is a little rough, almost even sharp. But it wears in quickly and after a week or so has a great feel. Most of my Spyderco knives seem to have something that starts out a little rough and wears in. It can be a little disconcerting, but I'm OK with it because at this point I trust that I'm buying a good knife. The handle on the Delica is like a pair of boots; it takes a while to wear in before it's comfortable. The FRN handles almost look better at 6 months than they did out of the box.

The blade on my sample is little off center, but not enough to trigger any OCD.

Off center, but not enough to affect the functioning of the knife

The handle is made of Fiberglass Reinforced Nylon (FRN) which is really strong and really light. It has what
they call "bi-directional texturing" which basically means that the texturing sticks out at different angles, giving the knife a good grip.The ergonomics are almost perfect for my average size hands. There's no choil, the so the handle is a little on the long side. But it's a good trade-off, because all four of my fingers fit comfortably on the handle. There's a lanyard hole on the handle which goes right through the clip, or obviously you could use it in place of a clip.

On the back of the handle is some jimping. It seems to be inset a little so it's not as grippy as it looks like it should be. Most of the time I get a solid, natural grip, and just choke up on it for those few other times.

The Delica features a sturdy, flat, deep-carry clip which can be set to right or left tip up or tip down carry, giving the clip a total of four positions you can put it in. Mine came out of the box configured for tip-up right-handed carry, which is probably what most people want. There are three torx screws which hold the clip in place and make the design even more robust. They are T7 Torx like like the body screws.

I used to take the clips off all my knives, just right out of the box. But the bigger knives are so much more comfortable to carry with a deep carry clip, so for the Delica it never came off. After 6 months of hard use, the clip still has a good tension on it. As shown in the picture at left, the anodizing on the clip has held up well.

Not being a metalurgist, I can say from personal experience that VG-10 is a very good steel for EDC knives. There is also a version of the Delica which has ZDP-189 steel. Maybe I'll get one some day, but I'm skeptical that this VG-10 blade could be improved on much.

My Delica has a Full Flat Grind (FFG) on it which I'm a big fan of. It's just one of the many touches that add up to this knife being all business. Some people think the leaf blade shape is weird, but I think it's ideal. One thing is for sure, you either "get" most of these Spyderco knives right away or you don't.

The longer shape of the delica almost gives it a more traditional shape since the "leaf" shape is elongated so much. The "spydie hole" is at a perfect location for my thumb to easily reach it. It has a little big of jimping behind the hole. I have found that in normal use my thumb never really makes it past the jimping on the back of the handle.

Like my other Spyderco FRN knives, the blade on the Delica seems a little on the thin side at first glance. I use mine as a knife and not a pry bar or other tool, so I've found the blade thickness to be more than acceptable for daily use. It's thin enough to make easy work of slicing tasks such as opening mail or dicing a potato, but it's thick enough to slice a garden hose or go through thick cardboard. The blade design does more with less steel, and makes the knife lighter. I have folders half its size and twice the weight. So I would say the blade thickness is a near perfect balance for the kinds of tasks most people would reasonably use it for.

The FRN knives in this series all use a back lock mechanism. It's a very good implementation, but not as strong as other types of locks. But it's very light, and it's still plenty strong. People use them to baton firewood.

Personally, I would rather it be lighter than a little stronger, and I like the feel of lock-back knives in general. My philosophy is that if I'm stressing the lock too much, I'm using the wrong tool. If I have any doubts about what I'm cutting, I just go grab a fixed blade.

The deployment on mine has been silky smooth from day one and has stayed that way, unlike the USA-made Native I bought with the same order, which took some time for the lock to wear in. I open mine with a steady motion of my thumb, smooth and steady. The way I close it is probably different than most. I extend my index finger to the spydie hole while my thumb presses on the lock, which disengages the blade from the lock. Then I flip the knife sideways a little and grab the thumb hole with my thumb, and from there it's the reverse of deployment. I explain it in text and people still scratch their heads, so I've made a video.