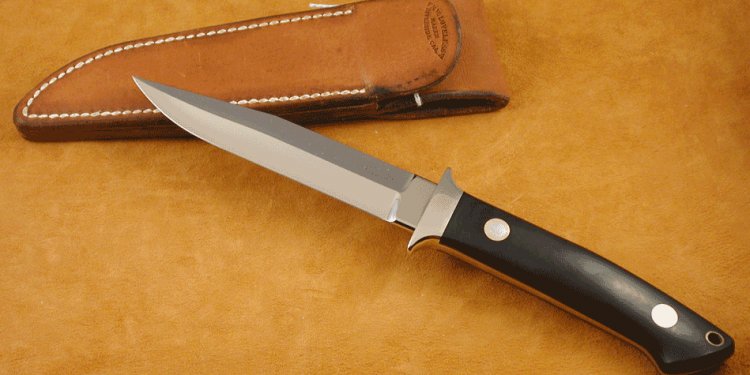 From my point of view, I can't remember life without Bob. He and I hit it off back in the 1980's. He really felt like a second dad that was just out in the shop. But, always ready to talk on the phone if there was a question. I could ask him questions about antibiotics, irrigation systems in Bolivia, or the best way to cook a piece of chicken. Don't know that Bob cooked that much, ever in his life, but he knew what he liked, and how it should be done. He had a brilliant sense of humor and a biting edge if you crossed his fine line, and some days you did not know where the line was drawn. He gave me a knife when I graduated from College; it was a stiff horn, green micarta. What else would Bob give except green micarta; he would have had his house made out of micarta if it was possible. I thought that he left it in my room by mistake, but he said "anybody that can graduate from college deserves a loveless knife." At the time that was a $400 knife.

I use to ask Bob about growing up with his grandfather in Warren, Ohio. Loveless was born in January 2, 1929, that was only 11 years after World War I, which ended at 11 a.m. on November 11, 1918. So, that would be very fresh in his grandfather's memory. Sometime Bob would talk about the family, but is seems that it was just not his thing to dig into the past now or never. One day he told me about him being about 6 years old and going out deer hunting with his grandfather and some older men, but at 6 anybody older than 13 was grown up and old. He said it was then when he knew that the knife was something important. Loveless told me "I saw this hunter take out a 3 inch jack knife and dress that deer out, and that impressed the S**t out of me." I don't know if he knew that word at 6, but knowing Bob I am sure he did.

Another time I asked him about what he remembered about his grandfather, and did he ever ask him about his early life in the 1800's, where they came from, how they got to Ohio or any civil war stories. Bob just said in a no nonsense tone "we were too busy running a farm to talk about anything." It made it seem like he was in a corporation and it was all business 24/7. I am sure they had family time at supper to talk about aunt so and so, and uncle whoever, but that did not stick in a young Bob Loveless mind.

Never the less, I guess he was like the founders of Rome, Romulus and Remus, raised by a wolf. His grandfather died in 1938, Bob moved in with his real mom, and grew up fast. Lied about his age, he was 15, and got into the merchant marine until he could join the regular military toward the end of WW II.

To speed up the story everyone knows, I will hit the high spots. Bob got to NYC in December of 1953, went to Madison and 45th Street to the great store, Abercrombie and Fitch. He saw a Randall knife, ask about the knife, and was stiffly told it would be "At Least 9 months for you". This did not set well with Mr. "The World is Mine" (Bob), and he set out to prove it was his world. He went back, found some Packard springs, and 6 weeks later, he took the new knife back to Abercrombie & Fitch. The manager took a look at the knife, liked what he saw and ordered more knives. Bob took that order to the bank, showing them he had a contract to make knives and needed $1, 000. They gave him the money. Bob would sell these at a good price of $20.70 each; the store would sell them for $34.50.

In January 1959 they moved out of Delaware because his daughter was very sick with pneumonia. "The milder air would help her" said the Doctor. So, he loaded up the Abarth and went West. The abarth was a very, very tiny car from Italy. A car that my father, J.W., was a dealer for in the early 60's and raced them in the 50's. One of the big reasons that he and loveless hit it off so well was the love of the Abarth car.

Loveless brought some blades with him that he had been working on in Delaware, some were stamped Delaware Maid, and most were stamped with the Lawndale, California logo. Very few were stamped N. Hollywood. In that time there was Loveless-Parke and Wood-Loveless. It was not until about 1969 that Bob said "we may starve but, I am going to make knives full time." Steve Johnson came into the picture in 1971 and was working with Bob in Lawndale, Ca. and right up to the first year in Riverside. This would have been 1974 when Loveless moved to Riverside, California. At that time, Steve Johnson and Loveless made the famous stamp "Loveless-Johnson".