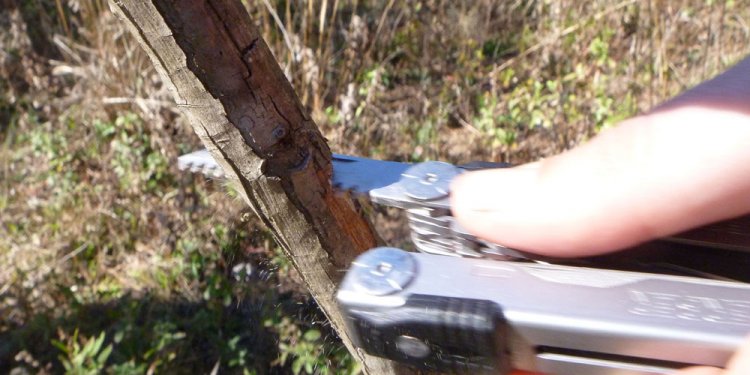 At any rate, I have some experience with Gerber multitools, and while they are decent enough, I have rarely been as amazed with them as I have been with multis from other manufacturers. Perhaps it was because my expectations of an inexpensive Gerber were not terribly high, but I found this little multi to be pretty darned impressive, right out of the clam package.

Of course the first thing I noticed was that lock up on this thing was tight! Strong enough to make my Leatherman Micra seem like a serious lightweight! This thing has some serious snap, always the sign of something well made- cheap stuff with that much tension usually doesn’t last long!

The pretty red handles are textured, rather than the usual smooth handles found on many other multitools, which I find greatly helps to get a grip on this tiny tool.

Another thing that helps is the cutouts in the handles- normally these cutouts decrease the weight, but I don’t know how effective it is for that in this case. Instead, they definitely help get a hold on it, which is great in a humid atmosphere like where I live. This model also comes in grey, although I only have the red ones. The grey model has the same tool selection from what I have seen. Sizewise, it is similar to the Leatherman Squirt series, which places it a little bigger than the Micra, but a little smaller than the Juice series.

The tool selection is fairly simple, consisting of a phillips driver, cap lifter/screwdriver and nailfile on one side and tweezers, eyeglass screwdriver and a blade on the other. Unfold the pliers and you have a small but respectable set of long nosed pliers with a tiny set of wire cutting teeth at the base of the jaws. Initially I thought this was a pretty tiny set of wirecutters, but then when I thought about it, you probably wouldn’t want to cut any thick gauge wire with such a small tool, so the 1/8 inch cutters are quite adequate. In addition, the whole thing appears to be held together with torx screws, which would allow one to disassemble the tool for cleaning, replacement of broken tools. I’ll let everyone know how well that really works out when I get brave enough to try it!

An interesting feature, and one I have only seen once before (on the BuckTool) is that the handles are labelled. The nail file says “NAILFILE” and the blade side says “BLADE” which I think is an exceptional idea since the spines of the two tools look identical. Other than remembering which tools are on which side, you are likely to select the wrong tool at least 50% of the time without it.